Alligator Symbolism . . .   A ferocious and furious reptile remains with us from 37 million years ago, it is  "el lagarto", the giant lizard . . . the Alligator.  In full armor the Alligator has survived from the ages of the dinosaurs.  It's secret as top predator is it's ability of concealment, patience it's top virtue, it waits for the perfect time to emerge from the darkness of the brackish waters to finally reveal itself, and it only reveals itself when it is ready to take action. 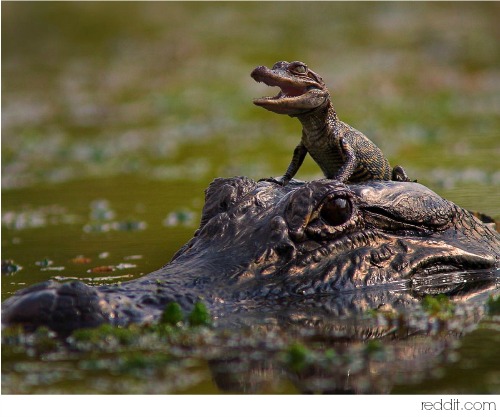 Alligator Meaning...
Fast and furious the Alligator lunges forward with speed and accuracy,  it is deadly serious.  If Alligator has appeared for you, it is time to study the ways and secrets of the Alligator.  Also called a "Gator",  the Alligator is the totem of keeping ancient knowledge and secrets.  Within the element of water flows secrets of ancient earth and our ancestors.  The Alligator fiercely protects these secrets within the realm of water.  This knowledge is powerful and holds the secrets of the time when magic was a part of life.  Alligator protects these secrets from those who would choose to use the magic for wrongdoing, and with wrongful intention.

Alligators keep many secrets to themselves, the higher aspect of the Alligator is the Dragon, it is the Dragon that speaks to the Alligator the magic of the Universe and the natural world, and how they work together.  In the armor of a knight the Alligator holds and protects these secrets.

If Alligator is in your midst, your energy field, it is calling on you... it is a time of new knowledge for you.  A time of exploration and study of ancestors and their magic.  Our ancestors used magic for practical purposes as well as their own spiritual evolution. 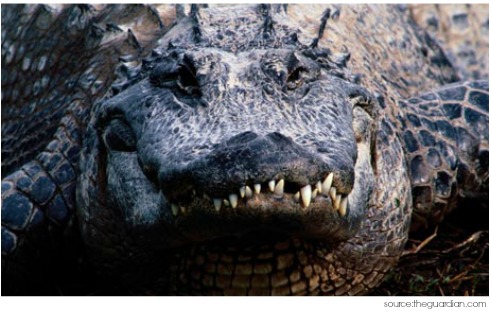 To challenge the Alligator is to court death

Primal earth energies flow through the Alligator, just as the flowing energies of the water swirl around him, he lazily absorbs the knowledge held in the water.  Alligator is a powerful symbol of survival, he is the ultimate survivor.  Alligator carries the energy of a warrior, ready for whatever may come it's way, ready to defend and protect all that is important to him.

Therefore to challenge the Alligator on his domain is to flirt with death.

Alligator Symbolism and his higher form the Dragon

Submerged beneath the protection of the waters, the Alligator shape-shifts into it's spiritual Dragon form.  In this form it is capable of seeing beyond this domain, it enters a realm of serenity where knowledge comes in the form of feeling.  In this liquid energy field, with only the eyes above the water line it is his feelings which fuel his creative visualization, a key power of the Alligator.

Alligator as a powerful totem animal forewarns when danger is in the midst.  Slow down and tune into your  6  senses, here in this synergy of senses your instincts and intuition work together to show you things that you cannot ordinarily see, such as danger or deceitful intentions. 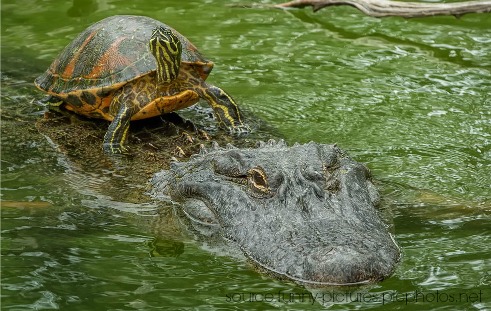 Alligator ... a taxi in the world of water

As ferocious and powerful as the Alligator is, she is a gentle, loving and protective mother.  Her mothering instincts are strong, as she waits by for her eggs to hatch, she carries them on her head out to the waters where they will learn to hunt and grow.

The female Alligator has been called the Great Mother dating back hundreds of years, as she is so connected to the Earth and the rhythms and cycles of nature.   Alligator flourishes in hot and humid climates, making her endurance even more impressive.

In all that Alligator offers in symbolic powers, she stands strong in her gifts as a hunter, knowing what she wants and how to find it.  This is among her secrets of survival.  To know all of her secrets one would have to shape-shift into this... one of the oldest creatures on Earth.