Exploring Chinese Zodiac Animals  ~  Signs and Meanings. . .  The Chinese zodiac known as Sheng Xiao, is a revolving cycle spanning 12 years, each year represented by one of 12 animals.  The current year (2015) is the year of the Sheep, spanning from Feb 15, 2015 to Feb 7, 2016. It is believed that characteristics of a person are influenced by their birth year animal.   Scroll down to view the Chinese Compatibility Chart to see who your best match really is!

So, what is your Chinese zodiac  sign?  Well.... it all depends on the year you were born.  We've all seen the paper place-mat at the neighborhood Chinese restaurant that shows all of the Chinese Zodiac animals and meanings, including all of the years from the early 1900's to the mid 2020's, showing us what our zodiac animal is.   Each animal rules for a year in the Chinese Zodiac, depending on the year one is born.  When it's your year, legend has it that the powers of the zodiac animal for your sign can have favor on you, but you must defer to the power of the animal.  Chinese teachings say to wear something red on a daily basis when in the cycle of your birth year.  Whenever I'm out at a Chinese restaurant with friends, we all refer to the chart and see who's most compatible with who, and who we should best avoid - ouch.  I wonder how many people make relationship decisions while on a first date pouring over the compatibility chart??   All you need to know is the year someone is born to know their Chinese zodiac animal. 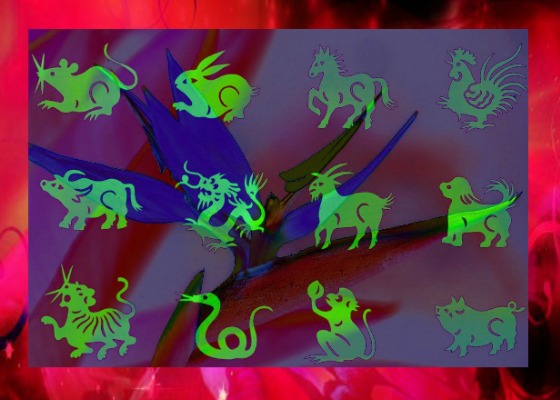 Seek those who are patient with your vision and ways.
*Be aware of being overly aggressive.

. You may have a dislike
of being around those with strong signs.
*Be aware of insensitive words or actions.

You are a creative problem solver.
*Beware of unrealistic expectations

Seek those who
are quietly expressive.
*Be aware of
chauvinistic attitude.

Clever
Seductive
Charismatic
A desire to follow
your own path.

*Beware of getting stuck in an old routine,
or being stubborn.

You are a solid
decision maker
*Beware of taking
yourself too seriously.

Others woo you for
your attention.
*Be aware that you
can anger quickly.

You are a natural
empath

*Beware of wandering
too far into your daydreams.

You are honest and dependable
*Beware of being taken advantage of

Others have a tendency
to underestimate your strength and will.
*Be aware of taking risks that appear attractive.

You have a talent for finding success

*Beware of giving too much of yourself.

You have an attitude of conquest
*Beware of stampeding over others

So, who are you most compatible with?  The term zodiac means "the circle of animals", and is found in all cultures, perhaps influenced by the Chinese zodiac.  Each animal has characteristics that are compatible or not with other animals of the Chinese zodiac signs and meanings chart.

Tiger is compatible with: Horse, Dog
clashes with: Monkey, Snake

You might also be interested in the Meaning of Birthstones.   Travel China Guide is a great resource for info on Chinese culture.