An old Cherokee is teaching his grandson about life. “A fight is going on inside of me,” he said to the boy.

“It is a terrible fight and it is between two wolves.

He continued, “The other is good – he is joy, peace, love, hope, serenity, humility, kindness, benevolence, empathy, generosity, truth, compassion, and faith.

The same fight is going on inside you – and inside every other person, too.”

The grandson thought about it for a minute and then asked his grandfather, “Which wolf will win?”

The old Cherokee simply replied, “The one you feed.” 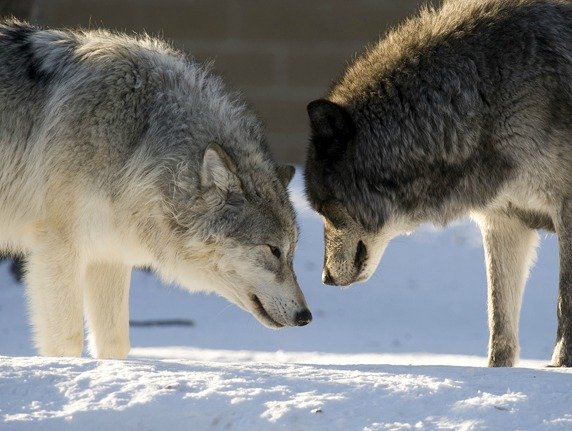 Th story  and symbolism of two Wolves succinctly teaches the power of what we focus on and how it creates and affects our lives.

The wolf wandered through the forest scouting out new territory for his pack. He came to a creek which he crossed over on a fallen tree.

On the other side of the creek there was a cave, so he became curious and stepped into the darkness of the cave. As he entered he saw that it was illuminated ahead of him from a hole in the ceiling.

From the darkness deep in the cave he could see the reflection of large eyes peering back at him. The wolf became startled and began stepping back slowly towards the opening of the cave to escape this dark figure.

Then creature in the cave spoke back to him, “Why do you fear”? The wolf turned back to the creature amazed. He felt that the stranger knew him somehow.

Then the stranger came forward into the light. It was the biggest bear the wolf had ever seen. Twice as big as the largest one he has ever seen.

You fear me because I am bigger than you, said the bear. You found me here because you are ready to confront your fear. All those who have ventured into my cave are ready to leave their fears behind.

You wouldn’t be here if you weren’t ready. It doesn’t matter what your fear is, when you leave my cave, you will go with the power to overcome the fear you came here with.

What fear are you “ready” to leave behind.

Now that you too, have entered the cave of the bear, you have the power to overcome your fear and leave it behind.

There will always be fears to overcome. Which one will you let go of today?

Are your ready to let go of that fear, so that you can take the path of the wolf and scout new territories in your life?

Just like the Two Wolves, the Scorpion and the Frog is a story about true character.