Greek God Names. . .  If power is carried in a name, then the Greek Gods have mastered the art of capturing attention with a name alone.  Names like Zeus, Poseidon, Hercules, Adonis, are all symbolic legends creating vivid pictures in our minds at the mere mention of a name.  We wonder, are they... could they... be real?  Legend is usually blended with some aspect of truth.  The myths remain in our psyche, each Greek God symbolically possessing great powers that have been gifted to them by the universe which have been developed and mastered.  We look to these Gods to awaken these powers in ourselves.  By using symbols we can attune ourselves to the aspects of the Gods that we wish to acquire and master in ourselves. 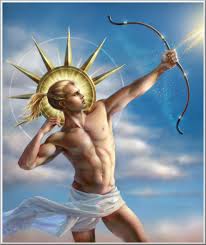 The Greek God Apollo, alas the legendary epitome of male beauty,
attuned to his arrow he launches the perfect shot.


Apollo - Apollo is known to be the God of the Sun.  His attributes are his manly beauty and physique of near perfect form.  His powers reigned over light, music, arts, knowledge, healing, plague and darkness, prophecy, poetry, purity, athleticism, and enlightenment. Symbols of Apollo include the bow and arrow, the lyre, and the laurel wreath. Animals sacred to Apollo include swans, hawks, crows, ravens, foxes, mice, snakes and roe deer.  Apollo is the son of Zeus and Leto, having a twin sister Artemis.

Ares - Ares is well known to be the God of war, bloodshed, and violence, tempermental moodiness and unreliability. Ares' sacred animals are dogs, venomous snakes, vultures and boars. Symbols for Ares are a shield, sword and armor.  His Roman counterpart is Mars.  Ares is the son of Zeus and Hera, his wife is Aphrodite.

Dionysus - Dionysus is the God of wine, festivals, parties, hedonism, drunkeness and ecstasy among his reign of powers.  His symbols include the thyrsus (a staff with a pine cone atop), a crown of ivy, a drinking cup, and a grape vine. Animals sacred to Dionysus are tigers, dolphins, serpents, donkeys.  Dionysus surrounded himself with a few attendants referred to as thiasos, that were always at his side. The Romans call Dionysus Bacchus.

Hades - Hades is the God of the underworld, possessing powers reigning over hidden wealth within the earth, that of precious metals and agriculture.   Hades symbols are the cornucopia aka the drinking horn, key, the sceptre, and a mythological animal Cerberus, the three-headed dog. The screech owl the sacred animal of Hades. To Romans his name was Pluto.

Hephaestus - Hephaestus is the God of fire, his power reigns over metalworking, and crafts. His symbols and powers are the tools of a blacksmith, the hammer, anvil and tongs.  In art he is a bearded man sometimes riding a donkey.  His sacred animals are a guard dog, a crane and a donkey. He too was married to Aphrodite. His Roman counterpart is Volcanus.

Hermes - Hermes is the messenger of the Gods.  He is the God of trade, travel, communication,  boundaries,  language, writing, diplomacy, athletics, and animal husbandry, he also hails over thievery, trickery.  Hermes is symbolic of guiding souls into the afterlife. His symbols are winged sandals, a travelers cap and the herald's wand.  His sacred animals are the hawk, tortoise and the ram. His Roman counterpart is Mercury.

Poseidon - Poseidon is the God of the sea,  reigning of all waterways, rivers, floods, droughts, earthquakes, he is renowned as the Earth Shaker.  Poseidon is known to be the creator of horses. . The symbols of Poseidon are the trident, and wild seas.  Sacred animals to Poseidon are the horse, the bull and the dolphin.  His brothers are Zeus and Hades, his parents are Cronus and Rhea. Poseidon was married to Amphitrite. His Roman counterpart is Neptune.

Zeus - Zeus is the father of all Gods, known also as King of the gods.  Zeus is the ruler of Mount Olympus.  Zeus is the God of thunder and lightening, law and order, reigning over the sky, the weather and fate. His symbols are the mighty lightening bolt and the royal scepter. Sacred animals of Zeus are the eagle and the bull. Zeus is the youngest son of Cronus and Rhea, Zeus overthrew Cronus to gain the power of heaven.  His Roman counterpart  is Jupiter, known as Jove, the most supreme God of the Romans.


Greek God Names of the Primordial Deities and Gods


Aether: The god of light and upper atmosphere

Chaos: The god from which all things came to be, the great void

Chronos: The god of time

Erebus: The god of shadows and darkness

Eros: The god of attraction and love

Hypnos: The god of slumber and sleep

Uranus: known as "Father Sky", God of the heavenly realm, and father of The Titans.

Ourea: The gods of the mountains

Phanes: The god of procreation

Pontus: The god of the primordial sea, the father of fish and all sea life

Tartarus: The god of the deepest realm of the underworld

Thanatos: God of death and doom


Hyperion -  Titan of light. Father of Helios "the sun", Selene "the moon" and Eos "the dawn".

Cronus - Titan leader.  Cronus overthrew Uranus (his father) to one day be overthrown his son, Zeus. )Cronus not to be confused with Chronos, the god of time)

Oceanus -  Titan of all Oceans, the wellspring of all the Earth's fresh-water.

Atlas -  Titan forced by Zeus to carry the world upon his shoulders.

Helios - Titan of the sun and guardian of oaths.

Perses - Titan of destruction and peace.

Prometheus - Creator of mankind, the Titan of forethought and clever counsel.

Styx - Titan of the Underworld river Styx, known as the personification of hate.

I love the legends and powers of the Gods and Goddesses, I find it interesting that may people are doing online searches for Greek God names, as well as Greek Goddess names for their soon to be born babies.  Hopefully this list might help understand the meaning, symbols and attributes of possible Greek God names being their new babies namesake!   ~ Blessings, Presley