Water Spirit Animals & Crustaceans. . .   Let's explore the meanings and symbolism of our abundant life under the sea....  Crab, Dolphin, Fish, Koi, Lobster, Nautilus, Octopus, Orca, Salmon, Seal, Seas Lion, Shark, Starfish, Whale, these are among the most popular and even with just the few listed here the variety is spectacular.   The creatures of the waters have much to teach us about flow, adaptation and balance ~ enjoy 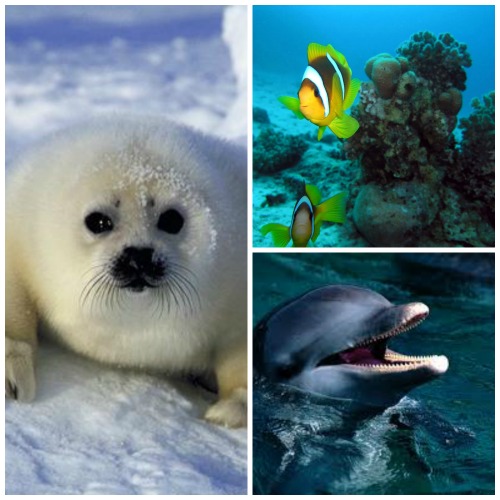 The symbolism of Water Spirit Animals

Water is feminine in nature, it's essence is intuitive, giving and flowing.  Water finds the easiest path in which to flow.  Bruce Lee taught the principles of "being like water", moving around obstacles rather than resisting and fighting them.

In our lives is is essential to find the ability within us that allows us to move around situations that may keep us blocked or stagnant.  Sometimes when we become blocked we begin to feel "stuck", and finding our way out of uncomfortable patterns or situations is daunting at least and seems impossible at most.

Water creatures have the ability to move in multiple directions -- up, down, to the side, sometimes even through vast networks of caves, and plant life.  Water creatures have also developed fantastic cloaking abilities, blending in so perfectly that if they remain motionless danger passes by unaware of their presence.   giving them

When you are in flow, a flow that is uniquely yours you are tapped in to a great source of power that has a feeling of eternity.  Tapping into the spirit of water and the gorgeous water animal totems will lead you on a path that opens and awakens your natural abilities of intuition.  Just allow it, and don't force it.. it will happen on it's own.

As the Oceans and Seas of the world cover 70% of Earth, the variety is seemingly endless.  From gorgeous tropical fish to deep ocean creatures, each has adapted to totally unique environments.  As our Earth changes, the oceans, seas and rivers change too, making it necessary for water beings to adapt or find more suitable locations.

Many of the animals on land, live in or near the waters such as otters, beavers, seals and walruses to name just a few, but spend most of their time in water.  Penguins get all of their food in the water, but also have to be wary of sharks and orcas who are on the hunt for a meal.

Several years ago I was watching a film on tv about whales and orcas, and the most amazing thing was captured on the film.  While filming an group of orcas eating penguins very near the shore, the last orca came upon a penguin and lifted him up out of the water with his nose and tossed him to the shore.  He had had his fill, he needed no more, his spirit opened to the spirit of the penguin as if to say I honor you and bless you on your way.  Of course I couldn't hold back the tears, it was beautiful and it made my admiration and compassion for animals burst open.  The design of the universe seemed so perfect, as if we have an inner intelligence and need for balance, as well as an intrinsic need to honor all life, even if it is our source of sustenance.

In your quest for learn more about these graceful and beautiful water spirit animals, may you find balance and peace within.