Insects shows up at the most peculiar times, these little creatures  simply must bring a meaningful message with their appearance.

It's funny how we absolutely love and adore some insects like ladybugs, or butterflies but find disdain in so many others!  Either way, they each have something to teach us about the world around us and ultimately our own nature.

Bees, Butterflies, Dragonflies, Ladybugs, Crickets and Grasshoppers, and all of the other quirky and entertaining tiny titans are all essential to cycle of life here on Mother Earth.    This portal to the insect world will take you up close and personal with the spiritual meanings and messages these tiny creatures offer  ~ enjoy! 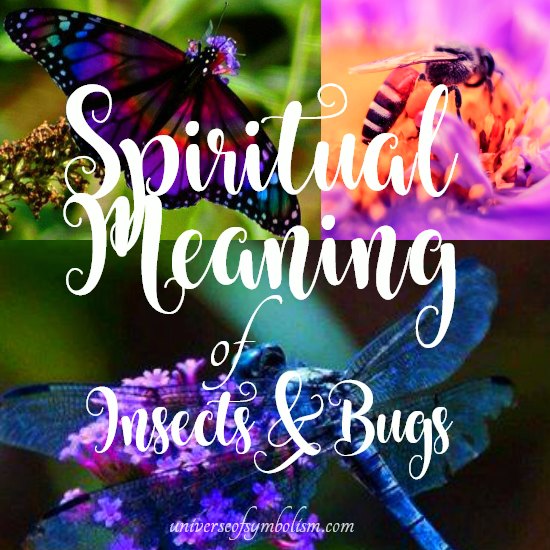 The Myth, Legend & Lore of Insects

Insects have an ability to be in our midst with us never even knowing.

By the very nature of their size, insects have can see the bigger picture of things when they are flying or crawling around in our environment.

Have you ever wondered what it would be like to be a "fly on the wall", to know the details of the most top secret meetings in the world?

The only time we really become aware of being surrounded by these tiny creatures is when we go out into the wilderness, then it becomes abundantly clear that these little guys are everywhere.  One ant announces to another that the picnic is on, one mosquito soon becomes a swarm, one bee soon attracts an entire enclave.

By far, Insects have the greatest population on Earth, and come in entertaining and frightful shapes, sizes and designs.  Each suited to perform it's specific task, and provide food for us and other creatures.

Bee's make a garden spring to life.  Bugs in the ground turn the soil making it rich for planting.  And as much as we don't like mosquito's, a colony of Bats can eat millions of these pesky critters in a single night.

A sampling of Insect Symbolism

The Scarab for example is an iconic symbol of the ancient Egyptians.  It is most famous for it's symbolic power of eternity, used as jewelry and head-dresses and on sacred items and ceremonies.

The Spider is renowned in Native American lore to be a spirit of creativity, weaving a web.  The dream-catchers woven by Native Americans are a symbolic web meant to catch the dreams so they do not fly off into the ethers.  In harnessing the dream the dream could be made real.  The dream-catcher also sets free the bad dreams and the nightmares so that they do not manifest in our 3d world.

If an insect makes it's presence known to you, take time to be with the little creature and hear it's message.

Spending time with the mysteries of Mother Nature are enrichments that feed the soul and spirit.            see wikipedia for extensive info about insects