Praying Mantis Symbolism ~:~  It is always good luck to find a Praying Mantis.  The Praying Mantis is agile, nimble and quick, like a ninja making it a formidable adversary.  The elegant dance of the Praying Mantis has a hypnotizing effect, it draws you in wondering what the next move might be. Praying Mantis animal magic is a special ability to seek and receive answers from the unknown.

Symbolic Meaning for the Praying Mantis . . .

The Praying Mantis and it's quick and practiced maneuvers makes it quite the skilled adversary in the insect world. When it encounters a human, it studies them with its large eyes, and positions itself for a defensive maneuver, but always holds its ground, not wavering or showing signs of fear.

The Praying Mantis ~&~
The Link Between The Physical and Spiritual Realm

The Praying Mantis has a way of hypnotizing its prey with it large eyes and slender body. The prey focuses on his eyes, which are mesmerizing. The Praying Mantis turns its head this way, then that way, beguiling it victims.

Praying Mantis symbolism is steeped in a hunt that represents the yearning for all things spiritual. Its entire evolution has modified it along the path of spiritual intention.

The Praying Mantis symbolizes the seeking of spirituality to further its evolution and become more of what it is meant to be. So, in hunting, it is fully aware of its purpose and only seeks to become more fulfilled.

The Powers and Symbols
of The Praying Mantis

The Iconic Symbols of The Praying Mantis are:
The Eyes, The Color Green, and The Hook 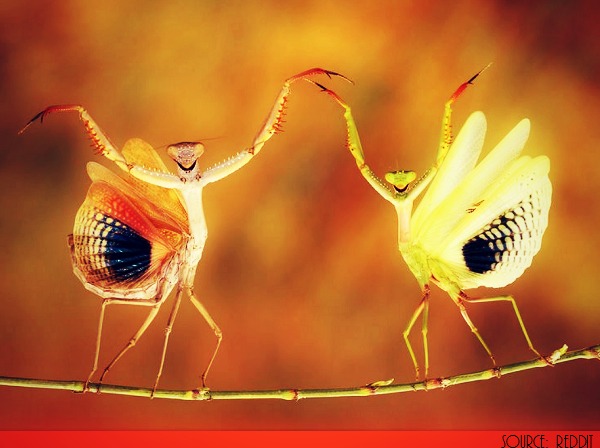 To intimidate an enemy the Praying Mantis strikes a fascinating pose which makes itself appear larger and more menacing to any opponent ~ As if to say "en garde" . . .

Exploring The Symbolic Meaning &
Attributes of The Praying Mantis

The Praying Mantis gets to the attainment of its nourishment after it has waited in stillness and has developed its intended approach to its prey. Attainment is one of the significant attributes of  Praying Mantis symbolism. Its mind is constantly fixed on attaining another meal, and it has trained well to accomplish this. In stillness it visualizes it approach. Its intention gives the visualization the power to accomplish what it sees in its mind. Then it acts on what it has practiced mentally, and attains its desired result. So symbolically this whole process is necessary for humans to apply to any accomplishment. The most successful people in the world use this Praying Mantis power of attainment.

Praying Mantis symbolism and connections to fulfillment and satisfaction.

After attainment, there is fulfillment. The Praying Mantis gets a great deal of satisfaction from a successful hunt. Once satisfied from its latest catch, the Praying Mantis goes into contemplation. It goes over the hunt again in its mind to see if there is a way to improve its technique. This contemplation is akin to the human method of mindfulness, and becoming aware. After it is satisfied that it has learned all that it can about itself, it applies what it has learned to the next hunt. In this way it fulfills its own "calling", as humans are fulfilled in their own hunt. It is in this self learning that the Praying Mantis signifies the "calling" that can only be discovered from inner contemplation.

Praying Mantis Symbolism:
to answer the call from deep within