Chakra Animals ~&~
The Power Animals of the Chakras

Chakra Animals ~:~ The Power Animals aligned to the Chakras will help you to tap into the energies that you need to gain strength, balance, courage, and guidance, based on the powers of the Animals and the needs of one's Chakras.

Chakra Animals & Symbols. . .   For each of the Chakras, there are animals that are symbolic representations of the powers of the Chakras.  The spirit animals are archetypal energies that vibrate with the same energies and powers of the Chakras.  The power animals featured on this page are a collection of animals traditionally associated with the Chakras, in addition while meditating on this, other spirit animals appeared to be of assistance.  Power animals are very generous, and anytime you connect to the power animals ~ they will help you to tap into the energies that you need to gain strength, courage, and guidance. 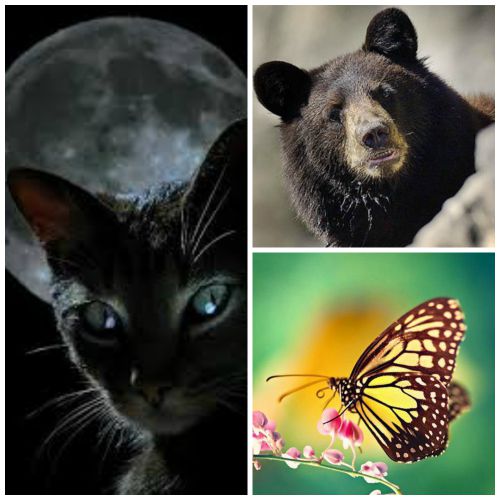 Root Chakra Animals serve Root needs of life, it vibrates at the color of RED

Lioness:  A strong energy of providing, a hunter, connected to the pride and to the protection of Earth

Skunk:   Symbolic energy of safety the need of protecting oneself, and ones resources, and creating boundaries to enforce protection

Buffalo:   A Native American symbol of the abundance of resources (before their near extinction)

Sacral Animals help with Life Force needs of life, it vibrates at the color of Orange

Bee:  A strong symbol of creativity can help us attain the abundance we desire

Tiger:  Connects us to sensuality and passion, and feelings of worthiness

Frog:  Symbolic of prosperity, and the cleansing and healing of old ways

Solar Plexus Chakra energies vibrate at the color of Yellow

Heart Chakra energies vibrate at the color of Green

Compassion, Love, Tenderness, helps to open the heart and  be heart centered

Throat Chakra energies vibrate at the color of Blue

Whale: Sings the song of the Soul

Wolf:  Howling of the hearts desire

Hawk:  Vision into the future

Crown Chakra energies vibrate at the color of Violet

Animals connected to the Crown: