Scorpion Symbolism & Meaning
an ever present aura of passion, attraction, and sexual energy

The symbolism of the Scorpion is wrapped up in it's ability to focus on it's power, this is the Scorpions special  gift.   Scorpions magic is the magic of "defense".  We all have to protect ourselves from threats. Many times we do not notice threats, but the scorpion was born to protect itself from invasion naturally.

The scorpion as stated above generally means self defense, or protection of the self. It is unique in the way it goes about dealing with threats. While it has its stinger held high, it shifts left to right not allowing its adversary an inch to attack, always keeping his stinger front and center.

The essence of the scorpion is like a ninja cloaked in black anticipating the every move of its adversary. The swaying of the tail is like the tai chi movements of the zen warrior. It is silent in its approach, striking quickly and decisively.

This is the precision you are seeking, and the armor you require, to master your foes.

As a spirit animal the scorpion can be called upon to protect you from threats, and to always be guarding your flank, and blind spots. It will keep an eye on your surroundings for you and make you aware of incoming invaders.

In this way, the scorpion is the spirit animal to guide you and empower you to a new sense of personal freedom knowing that you are ready and equipped to protect yourself at all times.

Just like the strike of a scorpion an epiphany can strike from out of nowhere, when you are listening to your surroundings.

The Scorpion and its symbols ~ The Sword, Armor, and Protective Poison.

The Totems of the Scorpion ~ Speed, Reflexes, and Precision.

The Magic of the Scorpion ~ Paralyzing Defense, Perception, and Conscientiousness 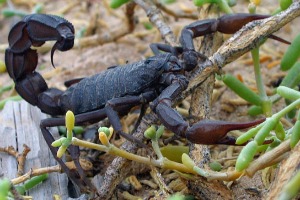 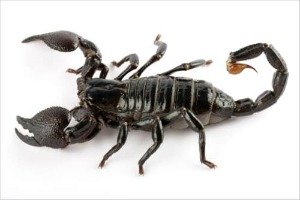 Scorpion Power Animal and where you derive your power. . .

If you get your power from the scorpion, such as one who is born under the zodiac sign of Scorpio, then there are a few things to be mindful of. Even if you are lured by the scorpion, then the scorpion is a power animal for you. Be mindful of its attributes and powers.

If you are enticed by the scorpion, it is because you need to protect yourself. You were born with an innate power of self preservation, and you need to use this power at all times. The challenge will be to perceive your gift and more importantly, to use it.

Scorpion Totem Animal and the perception of threats. . .

As a totem animal, you can look at the scorpions symbolism, and apply their characteristics to yourself.  Some of the totem powers of the scorpion are speed, reflexes, and precision.

Working with the scorpion spirit animal taps you into the innate powers of the scorpion  such as .speed in your ability to perceive outside threats, that is a gift you have. Another is reflexes. The reflexes of the scorpion allow you to process your surroundings a lightning speed.

Precision is a commanding power that the scorpion possesses. With precision it strikes with determination, knowing that it will hit its mark.

Scorpion Medicine and its unique energy. . .

The scorpion spirit animal carries an ever present aura of passion, attraction, and sexual energy. You can use this power to your advantage, but you also need to learn to harness it.

This is a cosmic energy that rules the universe that you can call upon to bring immense power to your rituals and magic work.   more totem info on wiki

Scorpion Symbolism:  magic and energy is in its power to focus its gift