Ankh Tattoo Idea. . .   The symbolism of the ankh tattoo dates back to early Egypt as a sign of eternity and power, especially power in the afterlife. If you were to attribute this symbol to the Egyptian god Osiris ( the lord of the underworld ) you would ascribe eternal power to him in judging souls that pass on from life to the underworld. It is a symbol of authority, and many Egyptian pharaohs had this emblem on their tombs and sarcophagi. 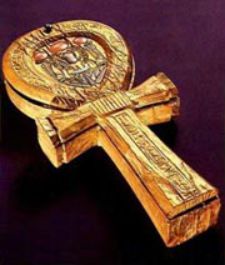 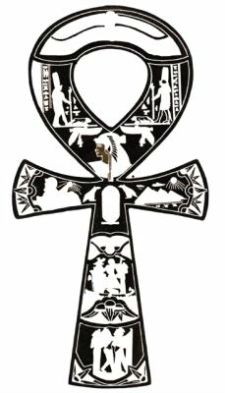 There is even some reference to the ankh being a parallel to the Christian cross, symbolizing resurrection. Both Jesus Christ and Osiris are said to have been risen from the dead, and so, conquered death itself. The cross and the ankh are very similar in appearance, but the ankh predates the cross by thousands of years. So its possible that the cross could have been a reference to the Egyptian symbol of the ankh specifically as a parallel to "eternal life".

Symbolism of Ankh Tattoo:  Eternity and the Afterlife. . .

The concept of eternal life is not one that is constrained to the afterlife. The ankh itself seemed imbued with the power to tap one into the knowledge of immortality. The Egyptians believed that there was great power in their symbols and so they used them generously in their architecture and every aspect of their culture. They believed that these symbols imparted the power that they represented to those that wore them or held them as sacred.

All of the Egyptian gods and goddesses have been depicted holding an ankh, so its importance is very substantial. The exact origin of the ankh is not known, which demonstrates how ancient the symbol really is. There are several hypothesis about what the symbol of the ankh actually is. Its known that it represents eternal life, but what is not known is the origin of the designs meaning. One speculation is that it is a union of male and female fertility symbols, but that cannot be confirmed.

There was a belief in ancient Egyptian culture that the veneration of the ankh could impart long life, the fountain of youth or special power passed down from the gods to mortals. This belief was also held by the royalty, especially the pharaohs, who were thought of as gods. The pharaoh passed down that power to his successor before his death, and so, as a representative of the gods imparted immortality to whom he chose. The ankh represented the passing down of power.

Ankh Tattoo Idea ~ Special Symbolism for Those Who Use It. . .

Ankh tattoo meaning has a special symbolism to those who use it. It is an amulet that brings good fortune and long life. There is a certain quality to the image of the ankh that gives it these powerful properties, and no one knows why. The ancient Egyptians knew the power of the ankh. To this day that power is still felt with those who meditate on it. If you were to meditate on the ankh image, you would feel something mysterious. It is that power that is its immortal power. It immediately begins to endow you with divine energy. No one knows who designed it, but it is without a doubt an image that is unparalleled in divine essence.

Ankh tattoo idea symbolically gets its strength from the divine forces of nature, and these forces are imbued into the tattoo. Those people who wear the tattoo of the ankh are dealing with powerful forces that are not to be taken lightly. The ankh will change your life for the better, but you had better be prepared to go through some changes. Most people are afraid of change. Change means inconvenience and the unknown. But the good news is that it will impart to you divine knowledge, so be prepared to adapt.