Archangel Camuel. . .    Camuel is an angel that gives clarity of mind and "visions". As the angel "who sees God" he gives visions to direct people in their lives. His number is 20, representing perfect vision and his stone is hawk's eye.

Angel Camuels Abilities. . .
To guide you to your purpose, and to have deeper
relationship with God 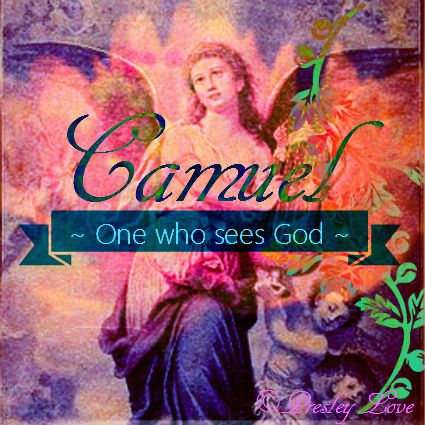 Meaning of the Angel name Camuel.

The meaning of Camuels name is "One who sees God". Camuel gives clarity of the mind, and visions of destiny. As an angel who sees God, Camuel can give direction and put you on your life path. Camuel always has his eyes on God, no matter where he is. It is his gift that he can be out of the local presence of God but can still see him in his mind.

The fact that Camuel has the ability to see God wherever he is, allows him to impart divine guidance and inspiration to mortals. To be able to "see" God also translates to a greater understanding of God. Camuel is also able to see into the essence of God, which makes him suitable as an angel to interpret the spirit of God to human beings more efficiently than the other angels.

Seek the Archangel Camuel for Guidance to your Purpose:


If you desire to summon Camuel, you would summon him from the south just as the sun is breaking on the horizon in the morning. To begin, you would find a spot to make a fire ( in a suitable fire pit ) out of wood gathered nearby, making sure to only gather enough for one hour of fire - ( estimated ). You would then gather any flowers from the area and boil them in a pot over the fire. If you cannot find any flowers, then leaves will do.

After the pot has simmered for five minutes, you take the hot elixir off the fire ( use hot pads ) and let it cool just enough to be able to handle the pot. You then pour a circle of the elixir around the fire, being careful to save about half of it. After you create the circle, stand in it and set the pot down at your feet.

Face the morning sun and raise your hands up with your palms facing toward you to receive. Call upon the angel Camuel and say, "Camuel, archangel who sees God, open my eyes to see the truth"! Having said this only one time with full conviction, you take the pot with the leftover elixir and put out the fire.  Camuel will respond to you within 3 days with a new revelation of your life. "Let it be so".

Mindfulness is a gift that Camuel imparts. It is a form of meditation that allows you to be conscious of what is important to you ( namely your life path ) and be constantly developing that path in your mind as you visualize it. This "mindfulness" is a very powerful gift. I gives you the control over "manifestation". Those who have mastered the art of mindfulness meditation have the power to channel energy into whatever intention they choose. There are those who have even developed the power to do miracles. Everyone is capable of it, but few ever take the power seriously. You can be one of those people!

Safety Information and Disclaimer:  You must adhere to your local zoning laws about making a fire.  Always: find a suitable place to make a fire according to your local laws, ie: campsites, bbq pits etc.  Always have a fire extinguisher with you.  Always have adult supervision if under 18.