Archangel Metatron. . .   Metatron is a scribe and record keeper. He records all the deeds done by mortals. He is also the angel of the written word.  As a scribe, he also knows everything that has ever been written by mankind. He is aware of the intention that goes into the written word and he a judges humanity based on those intentions and relates what he finds to God.

Metatron Abilities, Meaning & Symbolism:
To show the way of spiritual ascension, through writing, journaling and reading sacred scripts, books and messages written by those whom have channeled divine wisdom and inspiration.  Metatron can assist those who are working as spiritual teachers, oracles and guides who have the desire to let go of ego and be such a sacred channel 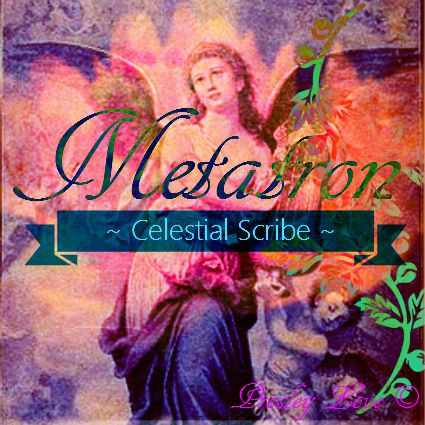 As a divine judge, Metatron is the only angel in heaven allowed to sit in the presence of God. He judges the intention of the spoken word as well, and the intention of the actions that humans commit. As a judge, he has the power to judge all intention, and he grants rewards and punishments to mortals based on their intentions.

As an angel of the written word he inspires humans to write, but at the same time, he holds them accountable to write what they were originally inspired to write. It is said that Metatron used to be the man Enoch of the Old Testament who God transformed into an angel. Enoch was the first man to receive the written word. He was taught writing to record the things shown to him by God.

Metatron, A Guide to Divine Ascension. . .

Metatron, having once been a man, shows people the path to divine ascension. The way he does this is through books that are inspired by him. If you summon Metatron, he will show you the books to read to lead you to your own ascension.

If you were to summon Metatron, you would summon him from the north.  The items that you will require for the summoning are as follows: Your favorite book, a pencil, a feather, a black stone, and some dirt ( in a glass jar ). Find the north facing side of your home and position a small table there for the ceremony.

Place the jar of dirt in the center of the table ( this is to summon Metatron to the Earth ). Put the book between the jar and yourself. place the black stone, the feather, and the pencil on top of the book. Hold your left hand over the book, and your right hand over your solar plexus. Repeat this phrase, "Metatron, Metatron, Metatron, come into my home". Repeat this phrase three times and close your eyes.

After you close your eyes, wait until your imagination shows you something. Write what you saw in the back of your book. Hold the black stone in your opposite hand while you write and place the feather in the front of the book. Metatron will reveal to you the path to your own ascension in three days time.

Archangel Metatron is an angel of "deeds". When he judges a human being he writes down all of their deeds and the intentions behind those deeds. Time in heaven and on Earth are different, so he has plenty of time to write down the deeds of all mortals. When a soul is good, their evil deeds that they may have done are not counted against them. God judges them by their good deeds, which are also recorded. Metatron encourages people to do good deeds. When he writes down their evil deeds, he also writes down the path that they should take to return to doing good. The ultimate choice is up to the individual.

As an angel of the written word, Metatron inspires people to write glorious works of literature. He played a part in writing the Bible, as he inspired the writers with Gods word. He also is responsible for the trans-formative power of the written word, and for the ability to receive insight from writing. He puts the subject of writing in the heart of writers. He guides writers while in the creative process to write thoughts of inspiration that will benefit all of humankind. Metatron also gives the reader the power to be inspired.