Archangel Michael. . .      The Symbols, Meaning, Duties and Powers of Angel Michael.  Michael is a warrior angel and is the commander of Heavens armies. He is also sometimes a healing angel. The meaning of his name is "Who is like God".  As a warrior angel he is responsible for imparting courage to soldiers and civilians alike. He specifically represents soldiers in battle. As commander of Heavens armies he is also responsible for organization, motivation, and determination.

Angelic Abilities of Michael:
To instill confidence and give direction, to instill courage when needed the most;
in life's battles, to instill the heart of a warrior 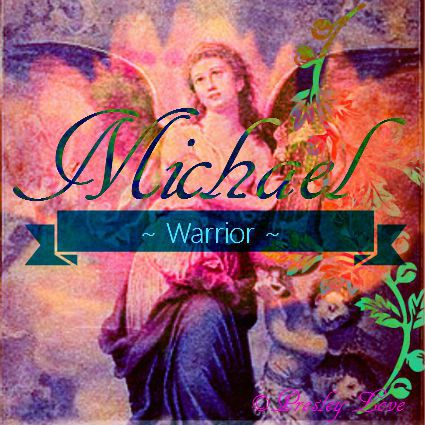 As a warrior angel Michael can give courage to civilians as well. Wherever courage is needed is where you will find Michael's influence. Michael also instills confidence. If you are fearful and don't know what to do, Michael is the angel that you would summon.

Michael Aids in Order and Organization. . .

If your life is chaotic whether at work or at home, Michael will bring order and organization to whatever situation arises. If your employees are not very enthusiastic, you would summon Michael to motivate them with a rallying cry. Maybe your just feeling lazy, or maybe your husband, wife or children are low in spirits, Michael would be the one to call on to enliven them.

If you just don't have what it takes to see something through, Michael's warrior spirit will awaken the spirit of the fight in you! Michael will give you the determination to see any project or challenge through to its finish.

If you were to summon Michael, you would summon him from the north. You will need a few items for the summoning. The items are as follows: A dried out piece of wood from an old tree, three nails, a penny, a white handkerchief and a semi precious stone of any kind.

Go find the wildest area around you, such as a forest or desert. Place the branch ( approximately 2 feet to 3 feet long ) at your feet facing north on the more tapered end. Place the penny in your right pocket. Tuck the handkerchief halfway into your left pocket so that it dangles out. Put the nails evenly spaced along the right side of the branch. Now take out the semi precious stone and hold it in your left hand.

Reach out your left hand straight up facing north and say these words; "Michael, archangel of power and might, fill me with the spirit of courage". Then repeat Michael's name 3 times and say "I bid you come"! Michael will come to you in your dreams with a message of courage and healing.

If you are not feeling motivated in your life, the archangel Michael is the one to call on. He knows how to stir up people to take action. If something needs to get done but you are feeling a little intimidated by the challenge, Michael will give you the courage to face it and overcome. He can give you the power to organize your approach at any problem and to face it with determination. Michael will give you the strength to see any challenge through. There is no problem too large for Michael the archangel to help you through.

Michael is the commander of Heavens armies, and as such, has the power to disperse all the other angels to your aid. This is a very powerful thing indeed. Michael should always be called upon before summoning other angels, or at least it is preferred. The reason is that all of the angels answer to Michael, and he is able to send them to you more quickly. It may be that you do not know what angel to summon. Michael would be the first and foremost angel to summon because he can send to you all the angels you need. He is very responsive and attends to all those who are suffering through challenges.