The Archangel Raziel is the keeper of secrets and mysteries. The meaning of his name is "Secrets of God". His specific number is 13 and the stone that represents him is obsidian. Being the embodiment of the secrets of God makes Raziel a very powerful angel. It is up to him to bestow secrets to mortals, but they must also prove themselves worthy and responsible.

Raziel Angelic Symbolic Responsibilities:
To determine who is ready to receive secret teachings, revelations and prophecies.  Secrets bestowed bring closer relationship to the divine realm and are an act of trust and honor. 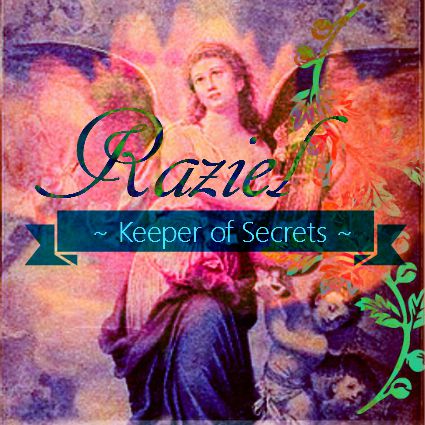 To begin to ask Raziel to reveal his secrets means that you have to have a very sincere heart. You must only ask about secrets that pertain to you specifically and not to anyone else. You have to be disciplined to follow through with whatever he shows you. You must also never share your secrets with anyone else once you have been told.

To summon Archangel Raziel you will summon him from the west. When Raziel first appears to you, he usually takes the form of a magical dragon, but he can take the form of a dark haired angel with dark wings, representing the mysteries of God. If he comes as a dragon, it will be a dragon formed of storm clouds. Be watching for storm clouds on the day of the summoning or thereafter for Raziels arrival.

You will need the following items to summon Raziel. A dictionary, a scarf, a picture of you and a close friend, a lemon, and a clear stone of any color. Go to a private place in your town ( making sure its private ). Face the west at about 9 am. It should preferably be a sandy area. Sit down on the sand and get comfortable.

Take the scarf and lay it on the sand in front of you folded out. Face one of the corners to the west in front of you. Place the dictionary in the middle of the scarf. Put the picture of you and your friend into the dictionary on the page that you think of first, meaning the first number that comes into your mind ( whether that is 7 or 157 ). After that place the stone on top of the dictionary.

Call upon the name of Raziel 9 times with your hands reaching out to the west. Then, say " Raziel, I summon you, teach me the unknowable, show me the mystery of God, let me see what cannot be seen, Raziel appear"! Raziel will manifest on the next stormy day. Look into the dictionary on the page you have the photo on and notice the first word you see. That will be a clue to the first mystery that Raziel will reveal to you.

As the angel of secrets Raziel will reveal to you the deepest secrets of your own heart first. Most people don't know themselves very well, but Raziel will guide you to your innermost thoughts and feelings. These are feelings that you didn't even know you had. Before you can come to understand the mysteries of God, you need to know the mysteries of your own heart. It may be that there are some things in your heart that need to be changed. Raziel will give you the insight to change the things that are getting in the way of truly knowing the deeper things of God and the universe.

When it comes to "knowing" the things of God and the universe, you must have the discipline to hold those things sacred once you know them. The deeper things of God come with a price to test your character. Whenever you summon an angel, you will be tested first, and Raziel is one of the costlier angels by which to be tested. It will cost you the letting go of your "thinking" to allow you to feel with your heart instead. The secrets of God is something that you need to feel with your heart, instead of your head. That transition from the mind to the heart can be a difficult journey to take, but it is well worth it in the end.