Condor Symbolism
& the Power Of Vision

The Condor animal spirit is all about "vision", not only physical, but spiritual.

To be complete one has to have "inner sight" as well as outer sight. That is the core meaning of the gift of Condor's vision.

There is a very special quality to the vision of the Condor.   Condor "understands" the messages that lie within each image it sees, whether it is a physical synchronicity or "sign", or an image in the mind.

The Condor is capable of interpreting the imagery in its entire experience, whether that is in the physical or spiritual and translating it into personal power, which ultimately shapes ones character and destiny.

The capacity to interpret images, or visions is Condor's special gift from the Universe.

This power that Condor receives from its interpretations is cumulative, having a spillover effect in all aspects of his life.

The Condor is a keen hunter reigning the skies.  He uses all of its senses to hunt its prey, raise its young, find a mate and protect itself.

Condor derives all of his physical power from this internal ability to interpret what he sees in the landscape of his mind.

Condor Symbolism
& The Power Of Interpretation

The Condor animal totem receives messages from his inner and outer environment through his inner sight, or vision, but, his power lies in the ability to interpret what he sees.

Part of Condor's supreme advantage is that it knows how to interpret what he sees to his advantage.

Any imagery can be interpreted in several ways, but Condor always seeks the most favorable interpretation.

He knows that the true nature of the Universe is to follow the most favorable path, so Condor naturally "chooses" that path of interpretation, and in doing so stays true to his highest nature.

The true nature of the inner mind is that everything is based on visual stimuli, from memories stored in the subconscious, to input that we receive on a daily basis.

All of the input that we receive on a visual or sensory basis, determines the choices we make.

Condor knows this truth very well and does not settle for anything less than the best path.

Magic Powers of Condor:
Protection through perception,
Revelation of destiny 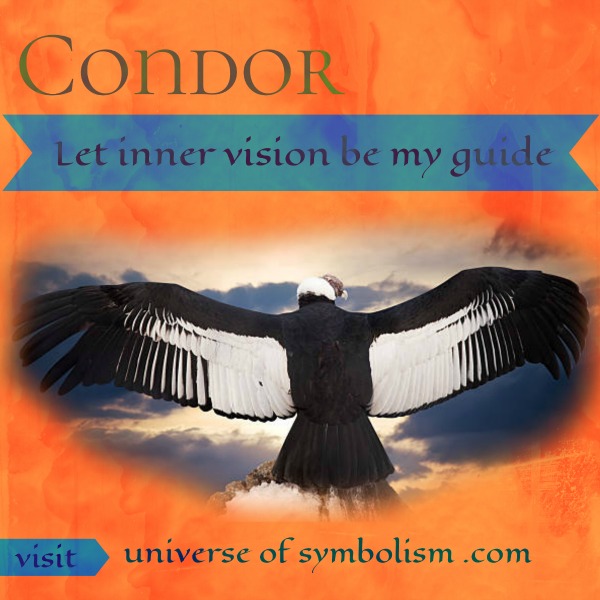 The key to the Condor animal spirits power is her "keen perception" which is the manner in which she interprets "her world".

The Condor specializes in vision and inner sight.

This special ability to perceive the meaning of something visual from the spirit world is indeed a very extraordinary gift.

Condor symbolism teaches us that a visual message can come in the form of a sign, symbol, synchronicity, an image in the mind, or a dream.

The Condor "knows" how to interpret them all.

As the Condor spends all of her time interpreting her surroundings, she has developed quick mental reflexes which aids in the development of the intuitive mind.

She has learned that she has to decide quickly what something means before she is flooded with conflicting information or second guessing herself.

This ability to perceive the best possible route for her thoughts influences the optimal configuration and performance of her DNA.  With optimum control of the inner mind she can transform her DNA for peak performance and health.

As has been mentioned above, Condor animal totem medicine powers are also visual, using the power of visualization to achieve the visions held in the heart.

She uses "visualization" to heal, find food, and achieve any of its goals.

And with the gift of Visualization Condor has learned the art of healing herself visually.

All of her visual capabilities are finely tuned, she relies on The Spirit of Creation to lead the way to unfold her destiny.   She flies through the sky going where Spirit leads her.

This process of Condor spirit visualization is one that takes patience and trust, having developed a close relationship with her Creator.

Condor watches with her inner vision and trusts that the messages she receives from Spirit are accurate and unlimited in potential and meant for her optimal good.

This unfolding visual process is the same process by which all things come into being.

Condor understands the process of creation and the relationship to the physical world and the unseen spiritual world, and trusts the Universe implicitly to fulfill all she visualizes through a simple childlike trust and knowing.

As the Condor animal totem continues on her "vision quest", many details come to her awareness about potential threats to her communion with The Great Spirit, and to her physical well-being and spiritual path.

Condor's mental reflexes are so quick that she immediately recognizes these threats, and by awareness alone, she is able to eliminate them, or navigate around them.

Spirit wants us to become aware of threats to our communion with Spirit so that that connection can continue to develop without obstacles.

One of Condor's greatest powers, is that she trusts Spirit to deal with any threats in a way that she is not capable of doing herself on the physical plane.

This ability of the Condor spirit animal is imperative to the "revelation of its destiny".

It is only when Condor can master the protection of her communion with spirit by recognizing and detecting threats, that she can insure that she fulfills her destiny.

The Spiritual Meaning:
Condor Symbolism & How to Apply it to Your Life

The Condor power is difficult to master, and takes patience and discipline.

It begins with a child-like trust in the Universe.

By understanding what Condor sees in his/her mind she learns to know the mind of The Spirit.

It is only by knowing the Mind of The Spirit, that one can fulfill their destiny.

This life is a perpetual "vision quest" that never ends.

As Spirit is infinite, and ever expanding so is our potential.

Spirit reveals His/Her power through "vision", and  to live an empowered life, you need the power of the Condor.

Meditate on Condor symbolism to show you the secret of "understanding" vision, and you will be well on your way on The Eternal Path.