Hippo meaning represents the submersion into the creative forces of the the universe.   In this realm there is a life force that exists in all things, nothing can exist without it.

Hippo arrives on the scene to teach you that  if you can understand how to receive from this source, you evolve and then you take a quantum step on the path of your destiny.

It is the destiny of all created beings to evolve and become one with the life force of The Creator.

Even the rocks are conscious of the power that flows through them and at some energetic level know where it comes from, they are connected and in tune knowing that they have great purpose.

In fact, nature is more conscious of the Presence of that living spirit within it than most humans are.

The earliest humans were aware of it and according to ancient manuscripts they had powers and longevity that made them appear as gods to the later generations who forgot their connection to the Divine.

Hippo totem animal can help you reconnect to that divine conscious awareness and help you to begin to flow with it once again.

The hippo spirit animal has profound instinctual powers and these powers comes from her connection to the element of water.

It's not a coincidence that hippos are born underwater, and spend most of their time in the water submerged up to their eyes just like a crocodile or alligator.

They are born "knowing" the connection to The Spirit of the creative forces born within water.

Many ancient civilizations believed that the gateway to the spirit world was through water.

The hippo animal totem derives all of her strength from this "knowing" connection that is alive in the waters.

Hippopotamus teaches that it is this "knowing connection", that give spiritual nourishment, sustenance and growth.

This spiritual knowing can be attained by submerging yourself in sacred waters and training yourself to pay focused attention on your intuitive messages and instincts that arise.  At first those instincts and intuitions will be quiet and small, but with practice they will become large and powerful, and then something of destiny and calling will be revealed to you. 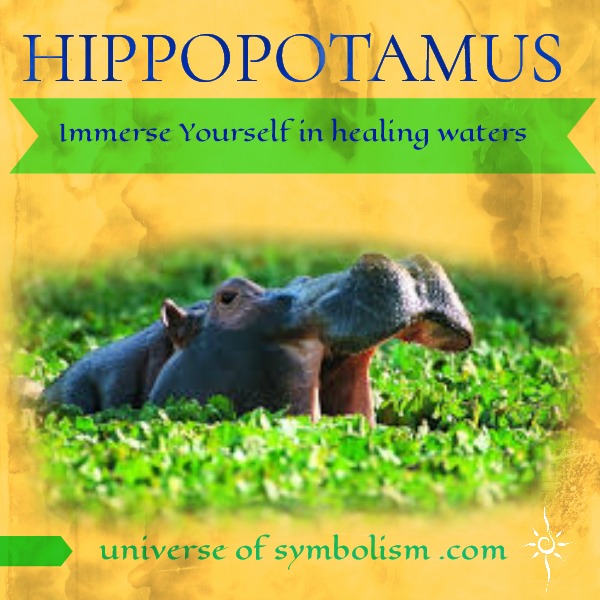 Hippopotamus is renowned for being a symbol of motherhood, healing fertility and the sacred waters of the Nile River in Egypt.  The Hippo is also a beautiful symbol of the love and protection of children by their mothers, the Egyptians created statues with the head of a hippo to bring the blessings of fertility and protective love for children.

The name Hippopotamus means "water horse", the name in itself implies strength.

The hippopotamus spirit animal is the embodiment of physical strength, and when needed he is a formidable opponent.

The jaws of the Hippo bring an electrifying force and can crush anyone who dares to cross him, to challenge the Hippo is to make a statement of war.  Even a crocodile or alligator is no threat to the mighty hippo.

The Hippo is not one to be trifled with, or as Michael the Archangel in the movie "Michael" was known "not to suffer fools"!  So it is with the Hippopotamus.

The hippo is the spirit animal of intuitive healing, because of it's strong ties to waters of the Nile which Egyptian legend tells us have ancient healing properties - and water being the mystical realm of intuition.

The hippopotamus animal totem knows how to rejuvenate itself through bathing and swimming in water most of the day and by drawing from the connection that water has to Spirit.

To bathe in the energy of Spirit is very healing.

Hippo becomes aware of what Spirit is saying through constant meditation.

It is this constant unbroken meditation that is the reason for hippos ability to tap into the energies of healing and good health.

Stronger, bigger alpha hippos understand this unbroken meditation and that is the secret of its longevity.

The connection to Spirit that the hippopotamus totem animal creates through its constant unbroken meditation allows it to form an energy barrier, and enmasse a group of hippos creates a very strong defensive energy field.

The alpha hippos are the best at this astral support and defense and got to be alphas in the herd by distinguishing themselves in service to their own.

The hippo herd acknowledges which hippos are strongest energy protection and grant them the alpha position. So, it is not by a show of physical force that hippos come to lead a herd, but by service and protection of the energy connection that the other hippos have.

Hippopotamus Symbolism And How To Apply It To Your Life

The power of the hippopotamus animal spirit is extremely important to us humans. Many humans have lost their divine connection in the age of technology, yet it is this divine connection that gives us strength, brings us healing and guides us to our life purpose and calling.

To apply the lesson of the hippo, one must begin to listen to the voice of your own instincts, sensing the energy of Spirit around you like the Hippo does in water.  As you listen to this voice you come to know it as the voice of The Spirit Of Creation within you.

When you lose touch with this inner voice you can begin to feel completely lost and alone.   Your inner voice and instincts are The Voice Of The Creator within you, they are there for a very special purpose - to guide you, to help you feel empowered, to help you feel that you are never alone.

Many these days often ignore that voice, and when this happens you slowly begin to sever the connection to your own power.  You will know this because you feel depleted, weary and not sure what the next step is.

But, you can regain that power by simply going into nature, and by listening to what you "feel", this is Spirit speaking within you.

Spirit speaks at all times in many ways. If you start small, by listening to the little details of intuition, you will be granted greater and greater power in your life.

Hippopotamus appears for you to show you how to listen with your whole being to a voice from above that is trying to help you.

With a connection to Spirit all things can be healed