The meaning of ostrich and her powers begins with the denial and total disregard of all things negative.

Ostrich plunges her head underground to "dispel" negative energy, in this way she grounds herself with the truth that lies deep within the Earth.

Ostrich does not hide her head in the sand because she is afraid, she does it because it discharges the negative thought from her mind.

In fact, ostrich is very positive.

Ostrich power animal is constantly cleansing her mind of any negativity to allow only positive thoughts to thrive.

When she buries her head in the sand it reminds her of what it felt like in the womb of her mother.

Her mother, the Earth, provides her with the nurturing she needs to perpetuate positive energy in her environment and pass it on to her offspring.

Ostrich Symbolism  &
"The Need For Speed"

Ostrich is by far the fasted land dwelling bird on Earth.

She decided along her course of evolution that she would rather run, than fly, so she developed incredibly powerful legs.  So powerful, that in the Middle East people ride them!

Ostrich likes the feeling of running on land because she is so connected to Mother Earth.

Even the soles of her feet ground her when she runs, and she finds exhilaration in it.

This is how she builds up her energy.

As humans we develop energetic speed by becoming aware of truth, and acting upon it, this is the lesson of Ostrich symbolism.

The higher our vibration, the more we are filled with joy and ease in all that we do, a very benevolent insight that the Ostrich spirit animal has come to share with us. 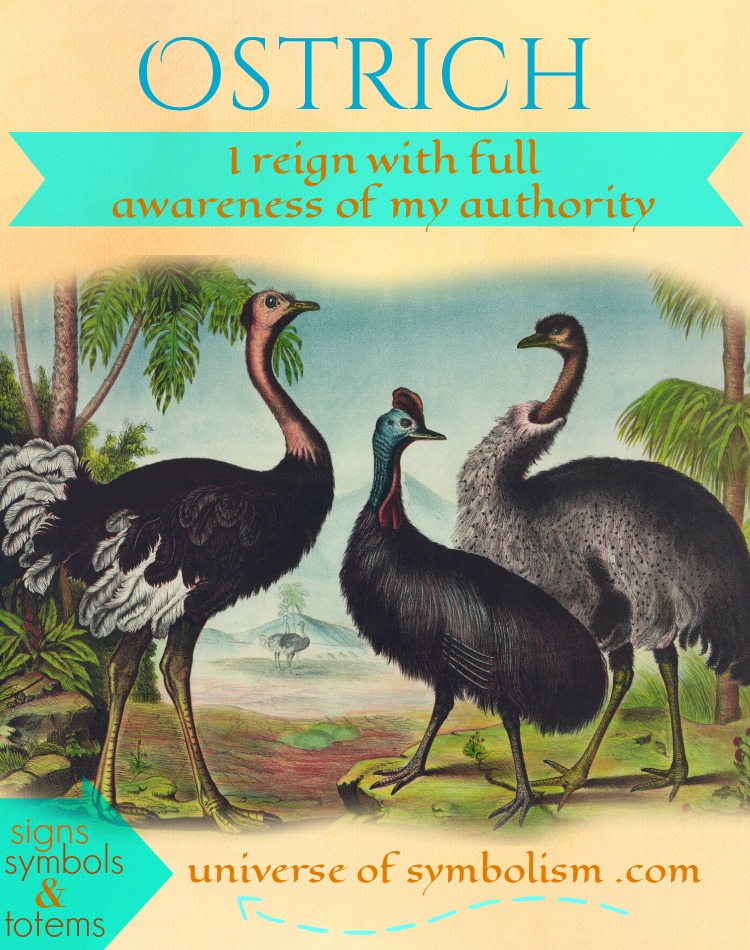 Ostrich ~ A beautiful creature that embodies the reigning power of feminine awakening & empowerment, having elegant presence and an aura of authority

Ostrich Symbolism ~&~
The Queen Of The Birds

The Ostrich symbol represents royalty as the queen of all the birds.

She is by far the largest of all birds, and if the lion is the king of the jungle, the ostrich is the queen.

She carries her head high in the air on purpose to indicate that she is an alpha.

Even the male ostriches have this alpha characteristic, but it is the females who bestow that alpha energy to the males.

Ostrich society is matriarchal, that is, the females lead the tribes.

The male ostriches know that the female is the one in charge and has no problem with it. As a result, ostrich families live in peace.

The ostrich is always meditating on her royalty as a queen of all birds and fears nothing, not even lions!

Predators very rarely attack ostriches because she carries herself with full awareness of her authority, and the other animals respect that.

Ostrich Symbolism ~&~
The Wonder Of Curiosity

Even though the ostrich is the queen of all the birds, she still has a childlike curiosity.

It is from this curiosity that she derives her power.

All of her other attributes revolve around her curiosity.

She has a childlike wonder about everything, and because she shuns all negative energies, she is able to perpetuate that sense of wonder.

The meaning of ostrich, at her core, is curiosity, but it is an innocent curiosity.

She follows her curious instincts and allows it to take her wherever that instinct leads, similar to how the Turtle enters the sea and trusts where the waters will take her..

Ostrich's curiosity is the voice of her instincts. It is that divine voice within that guides Ostrich's destiny.

There is yet another aspect to ostrich power animal and why she hides her head underground.  It has to do with the invisible spiritual world.

Ostrich can see what other animals and humans cannot.

That is why she is so good at dispelling negativity, or at least what is negative to her.

For example, ostrich can always tell when a predator is near.

She hides her head in the ground, and can sense them approaching through the vibrations of the Earth.

She can also sense many other things about the intentions and thoughts of other animals and Ostrich spirit animal can teach us to use this technique, by going into stillness.

Ostrich Spirit Animal conveys authority and royalty in her aura