Rhinoceros Symbolism
A force to be reckoned with

Rhinoceros symbolism . . .  is all about breaking through obstacles, and he appears in your midst to help you identify and "charge through" these obstacles with the fervor and confidence of a warrior!

Those obstacles can include:  fear, anxiety, depression, trauma or any barriers that can keep us from achieving our goals or being successful at anything at all!

The blocks can be small, or very large, but even a small barrier can be monumental to overcome based on the nature of the barrier and where it is coming from.

Insurmountable barriers can be torn down without much effort also depending on their relationship to the individual and its hold in the subconscious mind.

Meditating on the power of the Rhino spirit animal can bring the answers to breaking the hold those barriers have on you!

Rhino looks like an ancient warrior clad in armour, ready for battle with his horn being his spear, and he knows that his power is indeed a force of nature to be reckoned with that not many can challenge or defeat.

He is at the top of his game, and when you can tap into the raw power of the Rhino you are tapping into the confidence of all the Rhinos that ever walked the face of the Earth.

Rhinoceros Symbolism  &
the Power of Breakthrough

When a Rhinoceros charges, there is very little that can stop it.

The Rhino is already determined before it reaches any inpass that it is going to break though whatever is barring the way.

He/she decides ahead of time that whatever would impede its progress, is going to be eliminated, that is the awe-inspiring power of the Rhino.

You can learn from the rhino totem animal by "knowing" and deciding that no matter what comes in between  you and your destiny, you "are" going to break through!

There can be no doubt in your mind. Say to yourself, "I will go beyond this barrier, I will conquer this barrier, and I will reign in this realm in supreme confidence", and the answer will come to you, that is the power of the charge of the Rhino!

Rhino does not have to boast, Rhino's confidence can be seen and felt by all that are in his midst.

Having the goal of a breakthrough is a power that you can tap into with the aid of Rhinoceros symbolism. 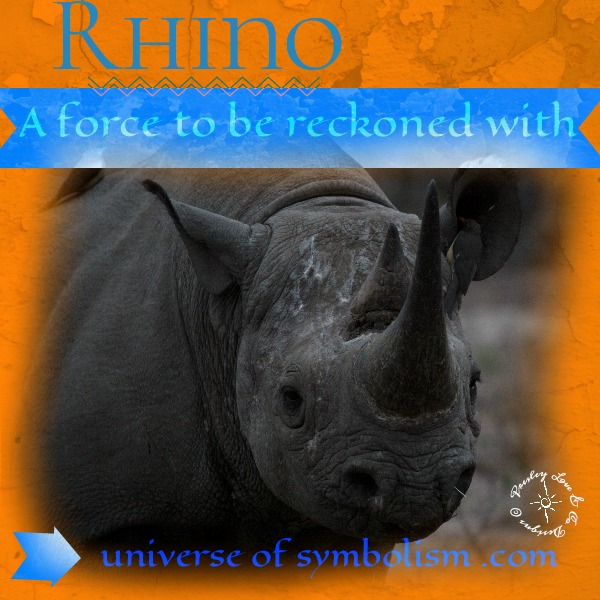 help protect the Rhino, join me in supporting WWF

Rhinoceros!   A force of nature to be reckoned with for sure, like that of a tornado!
To me he looks a bit like a Dinosaur and even the names sounds like the name of a Dinosaur!  What do you think?

For the Rhino power animal, it's thick skin represents "defense" in many ways. Its thick hide protects it from predators, just like that of a warrior clad in elaborate armor.

His/her skin is very difficult to injure. Rhinos defensive totem power protects the mind from the invasion of unwanted thoughts.

The defense or protection of the mind comes first for the rhino because mastery over the mind protects the body and the emotions as well.

By protecting the mind from unwanted thoughts, the mind is open to receive answers for physical and emotional healing.

When tapping into Rhino medicine, you can learn to create a powerful energetic shield around yourself that works just like the shield of the Rhino's skin.

Rhinos medicine power is based in his/her ability to break through mental barriers as it does  physical barriers.

Rhino spirit animal has the power to overcome harmful memories by changing the way it thinks about those memories.

Many memories linger and continue to hurt us in many ways because we don't know how to confront them.

Rhino "charges through" his/her mind choosing to replace bad memories by learning the lesson of the memory, and in doing so, overcomes the negativity stepping back into and and regaining their full power.

Rhino power animal offers great medicine to heal our thoughts and emotions and helps us step back into our original and authentic power we were born to walk with.

It may not seem magical at first, but Rhinos greatest power of all is the power to recognize where the blocks are in its own subconscious mind.

Rhinoceros is able to track emotions, physical illness and thoughts to their place of origin and reshape them and be transformed by reprogramming those thoughts.

Rhino has the power to visually "see" with its third eye, even those its physical eyes are very weak.

Through it's horn, precisely where the 3rd eye is, with its third eye it perceives the patterns of blockades in its being and "mentally" busts right through them as if they were a pack of hyenas.

Moving forward to make a connection  to the
Power Animal Rhinoceros:

Meditate on the Rhino power animal to understand the power of break-though.

There is no end to the growth you can experience if you can go beyond your limitations.

Rhinoceros totem spirit can and will give and share with you the strength and protection you seek while you are waiting on answers to any impass.

With the Rhino, there is "always", a way!