"Crow symbolism opens us to the gifts of ancient wisdom and sacred laws.

Crow totem animal is the messenger of foretelling and warnings if crow has appeared for you listen for the messages that awaken your authentic self..." 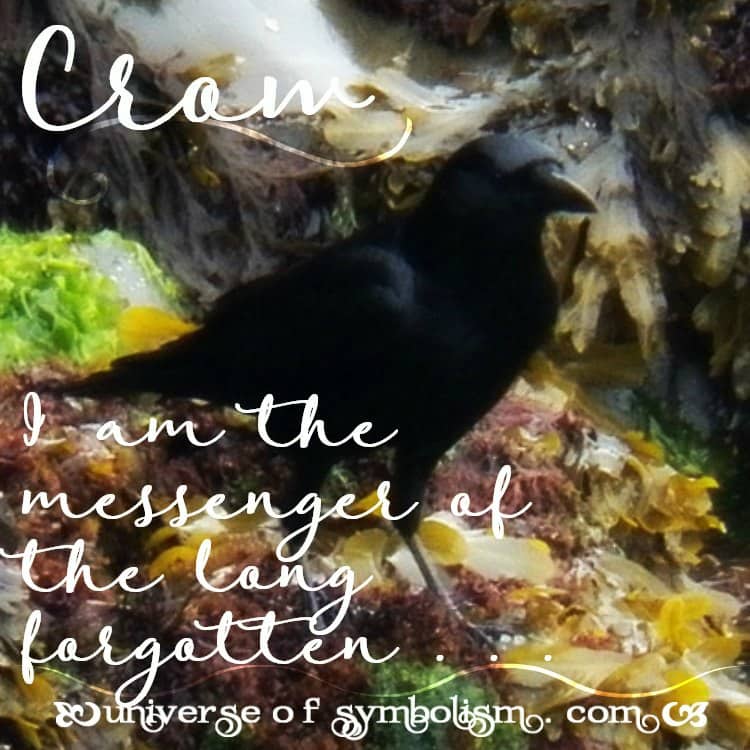 Crow is the keeper of the Sacred Law, the ancient magic and divination.

Crow is appearing for you to beckon you to begin to use your "second sight"... the silent sight, your 6th sense ... the gift of clairvoyance in particular, which is the gift to see into the spirit realms.

Nothing escapes the keen sight of the Crow, both in the physical and metaphysical realms.

As the custodian of ancient magical laws and wisdom, when the Crow calls to us we have an instant flash of our authentic self.

The Crow sees our soul~self, and her call echoes deep within the body as we try to remember the language that she so eloquently speaks.

If you're looking into the Crow symbolism,
you'll love this magical video from Laura, enjoy!

Exploring the Symbolic Meaning of the Crow... Venturing into portals of ancient wisdom

Further exploration into the symbolic meaning of Crow conveys that Crow has the ability to see and open portals to many dimensions and lifetimes, tuning into the sound of her call she can lead you to the portals hidden in plain view.

This is where you can find answers to the mysteries of your burning questions of who your are and what you are capable of.

She has observed the tribes of man for thousands of ages and she is filled with the knowledge of ancient wisdom and magical ways.

Imagine your power if you were living your true identity ~

the identity of your Authentic Self ~ this is the Sacred Law ...

Imagine a world where everyone were living from the power of their true self, nothing would be impossible when creating from this much higher vibration.

This is the power symbol and spiritual meaning of the Crow.

To let go of the old self, let go of all things holding you back... to step into your authentic power.

Dream Symbolism of the Crow

Going back in time into the ancient symbolic Crow meanings,  it is commonly accepted from many ancient cultures that The Crow is the harbinger that guides souls from the realm of living to the afterlife.

To this affect, the crow is a sacred symbol of death, with death being a rites of passage into another aspect of being and self.

As we enter the new era of spiritual awakening, The Crow is bringing a message today of  "the passing" of the old, and the birth of something new!

In this way, when you dream of the Crow, Crow can help you in working with the Law of Attraction.

This is beautiful significant totem energy from the crow.

The crow is also know to be a significant messenger ~ the bringer of omens.

When Crow appears in your dreams, the omens could be a warning, or a spiritual blessing, it is up to you learn how to discern, alas in his gift to us, crow has come to teach you to "read" the signs.

Crow has a powerful knowing of the changes of life and death and the changes in the cycles of life, this is why the Crow is feared, and is the ominous omen of death.

The Crow has long been known to appear when death is near, it will come to a window or near the home repeatedly for several days before the passing.

Crow will also come soon after someone has passed in the same way for several days, the Crow is acting as messenger, bringing a special message from the one who has just passed.

Pay close attention to when and where the Crow appears, as this will be part of the message.

When Crow brings a message from a deceased loved one it is a profound confirmation and magnificent symbolism of rebirth for your loved one on the other side. the passing of the old and the awakening of the new.

This Blessing from the Crow comes to all that should choose to accept it.

This "passing away" of the old, can come in many forms. It can come in the form of changes, like a new job, new relationship, or a new and great revelation that changes your life forever!

What blessed change is coming into your life?

Whatever it may be, you can be certain that it is good indeed! All you need is to embrace it.

When  you hear the Crow cawing... it is an omen to listen very closely to the messages, prepare yourself to release that which has been impeding your path so that you may enter new dimensions of being.

Symbolic Crow meaning... the essence of prophecy, magic and omens.

See all of the species & habitats of Crow here