In legend and lore the woodpecker totem represents digging deeper for the desire of the heart yet unattained.

Knowing with total faith that what you are seeking is held within the depths of exploration and perseverance.

Knock and keep knocking, seek and keep seeking, ask and keep asking ~ these are the ancient teachings that Woodpecker has come to teach.

Woodpecker holds the spiritual energy of sacred drumming, and having the psychic sense of knowing exactly where to find the blessings of nourishment and sacred sanctuary.

In drumming one enters a deep meditative trance where wisdom and guidance flow in direct proportion to the state of inner awareness.

Woodpecker Totem boldly represents marching to the beat of your own drum, finding your own rhythm, trusting your instincts, to boldly go in pursuit of what you desire.

Woodpecker exemplifies the desire and a need to have a home of your own ~ to carve out the way, to persist until it manifested.

A home of your own represents great personal power and independence, it feeds the energies of the base chakra.

Base Chakra, Desires of the Heart, Vibration 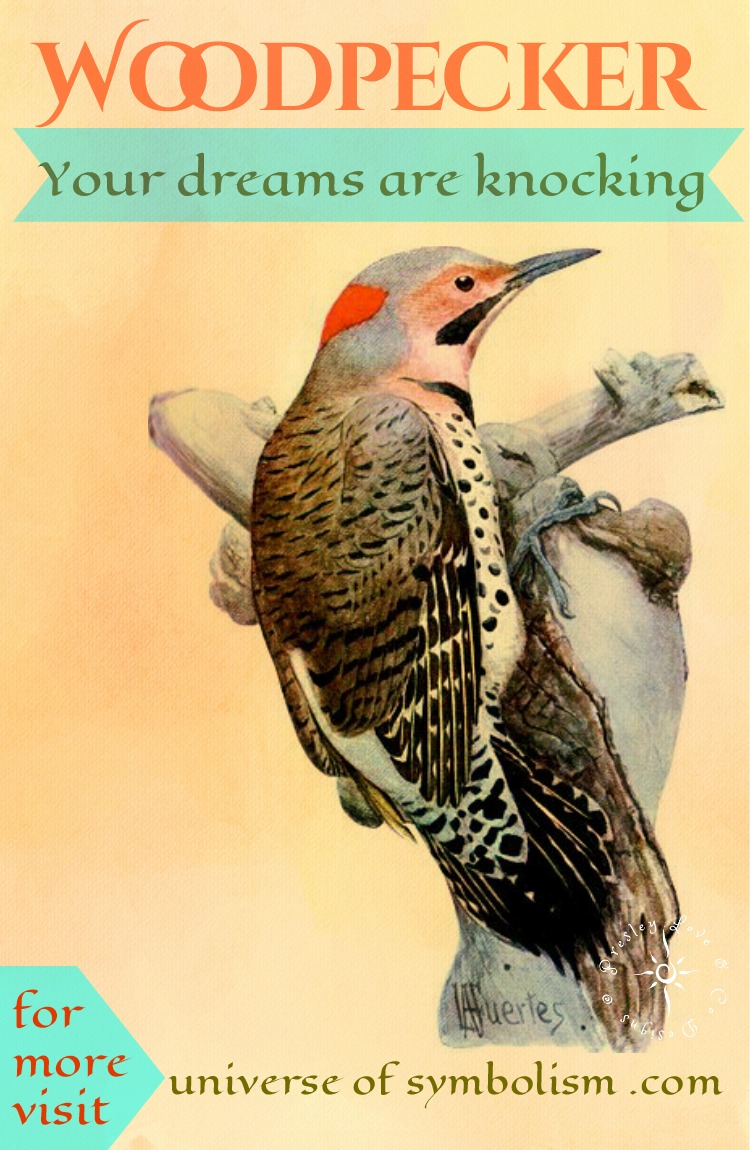 Woodpecker symbolism &
the art of persistence

Persistence is one of the primary symbolic elements of the woodpecker.

He/she feeds on hunting grubs within the bark of trees, it's his favorite food. In order to do that, the woodpecker needs to be very persistent.

This attribute shapes his very personality.

Every time the woodpecker finds a new grub, he rewards himself for his hard work.

His work is indeed very hard.  He has to peck through the bark like a jack hammer until he drills down to where he smells the grub in order to survive.

This trait has evolved over thousands of years.

The first woodpeckers did not have the strong beaks that today's woodpeckers have, that, evolved with persistent hunting and drilling and was passed down genetically to their offspring, and as they say, persistence pays off!

Like many other stealthy animals, most woodpeckers are extremely well camouflaged as to be hidden in plain sight and live in the forest.

Other birds, especially birds of paradise are brightly colored to attract a mate, and are very visible.

The symbolism of woodpecker camouflage  is that she chose to be camoflauged.

Woodpecker does not want anyone to see them, but rather to be identified by sound.

It is with her constant pecking that woodpecker makes her presence known.

She can even "speak" through her pecking rhythms, it is her very "voice".

Her camouflage is intentional so that she is "invisible"  but hear that little drumming and you will know she is there.

This pecking sound is a defense mechanism as well, and the signal is made all the more clear when woodpecker spies you approaching.

This combination of attributes signals a clear intention to all the forest, " I have a voice, and I shall be heard".

Woodpecker Symbolism ~ & ~
The Meaning Of Territory

There is another aspect of the symbolic meaning of woodpecker, and that is "territory".

The woodpecker marks his territory by drilling holes into trees in very specific places. It is like a matrix he creates for himself, networking all his choice locations together and memorizing them.

Like all creatures, woodpecker radiates an electro-magnetic field around his body, and that field is connected to the matrix he has created in the forest.

This matrix marks his territory, and any other animal, or person that passes through this network triggers an alert that the woodpecker immediately perceives.

People create a similar vibrational matrix by their state of emotions and what they are involved in, extending to the things they focus on.  This what  creates your electro-magnetic field, the frequencies or "vibe" you give off. 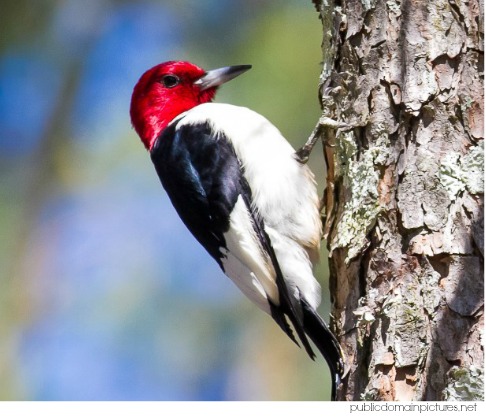 join us in supporting the Audobon Society

Woodpecker symbolism reminds
us to be mindful of our vibes