Crocodile Symbolism. . .   The symbolic meaning of Crocodile speaks of primal instincts. These instincts include survival, reproduction, and the need to pass it's strength on to it's young. Though we are all eternal beings, the survival instinct of the crocodile tells us that life is precious and we should seek to conserve it at all costs and in all forms. What is most important about the survival instinct is the survival of ones spirit. The spirit precedes the body. If the spirit suffers, the body will also suffer. The crocodile teaches us, through millions of years of existence, that the spirit is what gives life and strength.


Crocodile Symbolism ~&~ The Element of Water

Crocodile thrives in the deep dark mysterious realm of swampy water.   It is said that life began in the oceans, or the waters. The crocodile spends most of its time in the water, and thus near its primal source of universal origins. When it wades in the waters of life, it remembers ancient energies of growth from which its life began millions of years ago. That is why it has barely changed at all, because it remembers the original lessons that it was born to know, and so, has had no need for change and adaptation. As it bathes in these life giving waters, it tunes in to its original purpose and energy.

The Powers and Medicine of the Crocodile


Spiritual Meaning of the Crocodile
Ancient Legends, "Going with the flow" 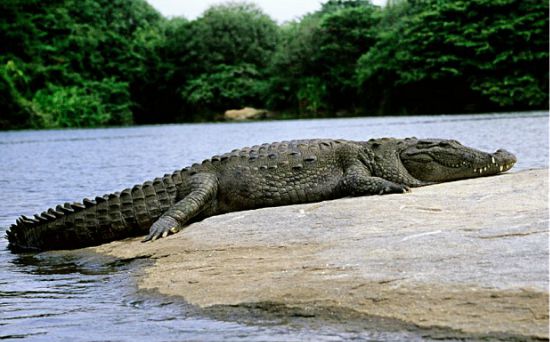 To be of the Crocodile Totem Animal is to be fierce, a force to be reckoned with, one who has connected to it's inner powers for millions of years ~ just imagine that kind of confidence!

Crocodile symbolism is based around the fact that it has survived over millions of years. It is one of the most ancient of animals that still exist today. Hence, the symbol of the crocodile is very well established in its attributes. Its well known that the toughness of crocodile skin is sought after, replicating armour for warriors designed thousands of years ago.  When you wear armour, you take on the spirit of toughness that the Crocodile holds. You will also be tested to become tough. This kind of toughness will test you to trust your primal instincts, and to go deeper into yourself for your answers. You will be tested to "know yourself, and find your innermost and primal powers", at some point in time to come to understand that your life, your dreams are all up to you, and not outside of yourself.

Go With the Flow

To be like the Crocodile is to go with the flow of the waters of life itself. The water is how the crocodile connects to the spirit world. In the water the crocodile connects to its primal instincts and remembers all of its past lives and what it learned from them. The water is where the crocodile receives all its messages from the universe. It learns everything it needs to know from the waters as the water conveys genetic memory to it. We also came from water. We are mostly water, and need to learn how to flow again with the knowledge that is contained in the water. Spending time in the water and drinking plenty of water keeps us in tune with our own life giving spirit, this lesson is the gift of Crocodile spirit animal.

Crocodiles range in size and location, with males being larger than females. The smallest of crocodiles are about six feet while the largest ( the saltwater crocodile ) can get upwards of 23 feet and weigh 2,200 pounds. There are many crocodiles all over the world and they are quite different than alligators and caimans. The crocodile has more webbing between its toes than the alligator. The crocodiles teeth show outside the jawline where the alligator has conical shaped areas in the jaws for its teeth to fit. Crocodiles are also vastly more aggressive than alligators.

With its jaws and many teeth, the confidence of the crocodile is unrivaled. . The bite of a saltwater crocodile is 3,600 pounds per square inch, the strongest bite of any animal on Earth. The symbolism of the crocodiles bite is in the grip.  It can take a lifetime to learn when to hold onto something and also when to let it go.

Crocodile ~ To be fierce and stand in your authentic power