Dolphin Tattoo Ideas. . .  Dolphin tattoo symbolism is steeped in the mystery of intuition. Intuition is a vast mysterious ocean of knowledge that can be tapped into through  your emotions. It is difficult for most people in the western world to tap into emotions because we are taught to be empirical in our thinking, that is, scientific and logical. The intuition of the dolphin is something that surpasses human ability. All animals have a deep seated intuition, but the intuition of the dolphin is the strongest of them all. 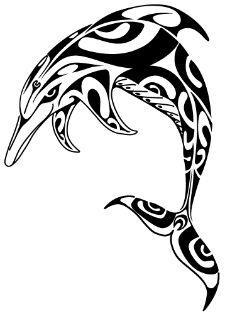 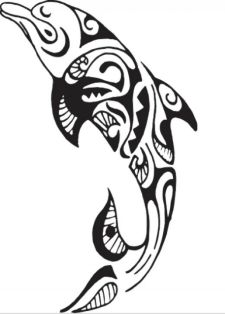 dolphin images believed to be in the public domain

Strong intuition is the very essence of dolphin tattoo meaning.  The dolphin has evolved passed basic intuition and developed another "sense"... echo location.   Echo-location works in harmony with its intuitive system, it is just amplified.

Dolphin tattoo symbolism encompasses both of these traits as a single whole and makes them a super-powered intuition. There are human beings that have developed this power and call it telepathy. Telepathy is common among twins and people who are truly soulmates. The dolphin is the animal who can teach telepathy to humans. People can learn to receive the dolphins telepathic messages, and in turn, learn to use it with each other. This is our spiritual and emotional connection to the sea and all the animals in it.  Yet another meaningful aspect of the dolphin and the ocean are the ties to the legends of Atlantis, and the great magic it possessed.

Symbolism of the Dolphin Tattoo:  A Meaningful Connection to the Sea. . .

The dolphin tattoo idea is the symbol of our connection to the sea and the element of water. Water is intuitive and female in nature. The female nature of water allows us to search our feelings and discover what is true to us. Feelings are the repository of our personal truth, and it is from this personal truth that intuition is born. To truly become intuitive, you need to learn how to search your feelings. What is it that we need to search our feelings. In a word, honesty. It is not about honesty with others necessarily, but honesty with your own heart. See: Dolphin Symbolism

The dolphin tattoo also incorporates "honesty". It is about honesty with yourself. It is when you can be honest with yourself that you can truly feel again, and thus, begin to develop your true intuition. It is when you learn to be intuitive that you "find yourself". Your intuition is your connection to the divine spirit of creation. Learn the lesson of the dolphin, and return to yourself.

Dolphin tattoo ideas symbolically represents honesty because all dolphin are perfectly honest and transparent with each other. They communicate at the telepathic level, so they know each others mind intimately. The power of echo location and sonar have helped the dolphin evolve way past the ability of humans in the area of telepathic intimacy. They feel what the others are thinking and feeling even when no message has been transmitted. They are extremely empathic, knowing when another dolphin is sad or joyful. That is the way that dolphins have evolved for millions of years and far surpass humans in brain capacity.

Scientists believe that the dolphin is possibly more intelligent than humans because of its larger brain. There is no doubt about their social integrity. They are very loving creatures, which cannot be said for the nature of humans. Dolphin tattoo meaning has a message for human beings, and that is "peace". Dolphins live in peace with each other in a very nurturing environment. That is the message that they have for humans, but we have to be listening.They telepathically send out the message to all humanity for "peace on Earth". They are the emissaries of the animal kingdom to humans because they communicate to all the other animals on Earth and hear what they say. Listen to the Dolphin and be healed!