The Symbolic Powers of Thor...  by Reiden Hol  "The God of Thunder Thor is known as "The Storm" wielding his hammer Moljnir he commands the skies and reigns over the forces of thunder and lightning. In some ancient pagan texts, He is considered the Father of the Gods, rather than Odin. He has powerful magical weapons and armor".

As Thor wields the mighty hammer Mjolnir, that is said can crush mountains. He wields His hammer with magical gauntlets, he also has a powerful belt, all of which amplifies His power. All of these relics symbolize the power to overcome any obstacle!  If one were to apply the mythological powers and symbols of the God of Thunder Thor to modern times, many parallels can be drawn. Ancient Norse tribes would call upon the god Thor for favor in battle. Thor also is The Norse God of "hallowing", which is to make holy or pure and clean. He would be called upon to sanctify someones life, a situation, a place, or thing.

Mythological Symbolic Powers of the God of Thunder Thor...

Thor brings the energies of : Exhilaration, Purification and Clarity

The Meaning and Powers of Thors Hammer "Mjolnir"

The Norse God Thors greatest attribute lies in His Hammer Mjolnir, which can be used to create or destroy.

His hammer is symbolic of masculine energies, and represents the power that is available in focused energy and intention.

Thor's hammer Mjolnir is a symbol of having the power over the natural world in the use of thunder and lightening.

When you see the lightening flash through the sky and hear the thunder roll… think of Thor and his mighty powers speaking to you of what needs striking away, or using the roar of the thunder to supercharge your will.

So, the God of Thunder Thor can, symbolically use His hammer to purge evil from a persons life, or to forge the path before them. The use of His Hammer is clear, His gauntlets give Him the strength to lift His Hammer, and His belt symbolizes His resolute determination to achieve His objective.

Summoning the Symbolic Powers of Thor and Mjolnir...

If there is anything in your life that impedes your progress, such as a fear, the power of Thor’s  Hammer would be summoned to "crush" your fear!  The symbolism of Thors Hammer Mjolnir is to crush the obstacles that get in your path to purity in your life.

Thor always watches the Earth to protect the innocent from outside forces that would seek to violate them in any way. The Norse God Thor is merciless in His defense of the pure of heart. If a heart is impure in any way, he uses His mighty hammer Mjolnir to purify an unclean life through many circumstances until that soul finds the perfect path in their lives.

If you were to call upon the symbols and powers of Thor, you can call upon any of His attributes in a symbolic way, for aid in any given area of your life, as people in modern times call upon the God of their own religions.

And so it is that when you summon the Norse God Thor to help you, you have to remember all of Thor's attributes, armor, and weapon, to understand the full nature of His power. Visualize what each aspect of the God of Thunder Thor represents, and its symbolism, in order to grasp the power of Thor, and avail yourself of His strength, symbols and powers! 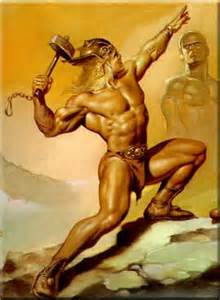