The Myths and Legends of  God Osiris...   by Reiden Hol    "Osiris is The Egyptian God of The Underworld. He is The Judge, symbolically, of both evil and good.  When a soul departed from the world they were brought before him for judgement.  The symbolic meaning of the name Osiris therefore represents the gates of judgement through which all shall pass... "

The story of the Osiris is both tragic and triumphant. He was killed by his jealous brother Set who was envious of his power and glory, so that Set could rule the underworld, and take that which was once Osiris' birthright.   Isis, who is Osiris' wife, resurrected Osiris from the dead, and they had a son by the name of Horus ( Referred to as "The Eye of Ra". Ra is The Egyptian God of The Sun, and father of The Gods of Egypt ).  Horus is The Avenging God... Horus avenged Osiris, by killing Set.

Osiris brings the gifts of :  Insight, Justice, Contemplation and Meditation

Osiris brings the energies of :   Rebirth, Immortality, Depth and Understanding

Osiris is the keeper of the magic of :   Visualization, Vision  and Destiny

Deity of The Underworld...

In the Realm of The Unknown, or The Unseen, that there is a "code of justice". Osiris; powers and symbolism lies in The Universal Justice that comes from any evil deed.  Many people call this code Karma, and most of us have seen examples of "cosmic justice" in our own lives!

If you were an ancient Egyptian priest or priestess or royalty, or even a farmer, you would have called upon Horus to avenge a "wrongdoing" in your life. Horus would be sent to render justice by summoning Osiris.

God Osiris is then, the symbol of balance, and the mediator between good and evil, harmony and chaos.

If you were in a dispute with someone, or were asking for wisdom to determine a wise path to take or choice, you would call on God Osiris. If you wanted abundance in your life, you would call, or "meditate" on the God Ra to "illuminate" your life, as he is The Sun God of Egypt.   Osiris is an Egyptian God of great mystical depth. His blue skin represents the ocean depths. His essence was lost in The Sea of Eternity upon His death, and His sister Isis recovered him and resurrected Him. As such, you would call to Osiris and his special powers in order to make sense of the fragmented parts of your life, even as he was fragmented in death.

Osiris is The Judge of The Egyptian underworld. You can summon his power to bring justice in an otherwise unjust situation, or to give you the wisdom to judge a situation wisely.

Another symbol of Osiris powers is wisdom. If you wanted the wisdom to perceive into realms that you do not understand, he would give you the "Wisdom of The Unknown", as he came back more powerful in knowledge after he was resurrected.

Osiris is a powerful spirit guide, who can lead you through all dimension of time and space, and give you the comprehension to take what you have learned, and apply it. To call upon the Osiris God powers of magic, is to transcend the laws of the physical universe, and find the answers you seek.

Another of his magical powers is that he is capable of metamorphosis, of shapeshifting into any person or creature that He desires. His main purpose for doing so, is to understand the nature of the creature or being whose shape he has taken, in order to be a good judge of both the living and the dead. He can give you the ability to "see clearly, through the eyes of another, and know their thoughts, feelings and intentions. This is a very powerful gift when you are not sure of the stance of a stranger.

In reference to being "The Lord of The Depths", Osiris is symbolically the Lord of The Eternal Sea, which represents the depths of the soul.

The wisdom he possesses is legendary even among the Gods, and all the Gods and Goddesses look to him for wisdom when it comes to matters that are beyond the depth of their understanding. He is the God of all souls, and represents the entire ocean of living souls. In his symbolic death  he gained the comprehensive understanding of the living soul.

Osiris is ultimately the judge of all souls.

When you summon Osiris and his God powers, be prepared to have your own heart revealed to you in his presence. It is no small thing to summon a God or Goddess. When you call upon him for guidance, the first thing that will happen, is that you will see the true nature of your own heart. You have to be ready to accept what is revealed to you. In knowing your own true nature in the eyes of this Egyptian God, you will find your greatest strength.

Even as the symbol for the souls self illumination, to summon God Osiris, is to find the path to self enlightenment.

Osiris ~ God of the Judgement 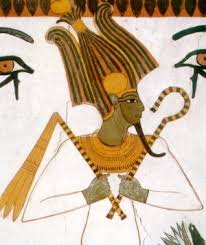