Gorilla Symbolism ~&~ Meaning
the heart of a gentle giant

This post is dedicated to Harambe, called by his caretaker at the Cincinnati Zoo; the Gentle Giant.

Though as gentle as this giant creature is, predominant aspects of gorilla symbolism are strength, respect and authority. 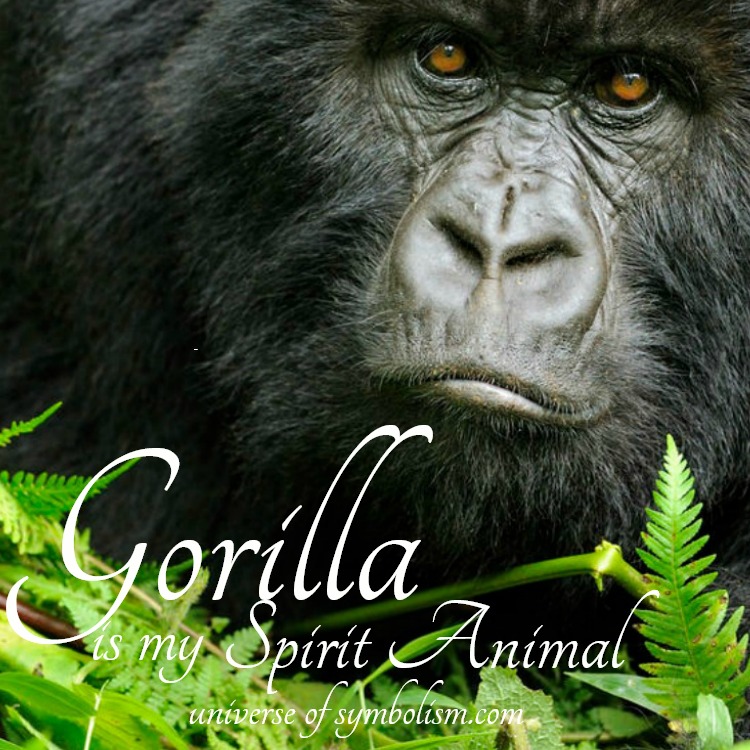 Despite the size and strength of the gorilla,  they are one of the many beautiful creatures that needs our ongoing protection for survival.

His strength is unmatched even by creatures twice his size. If you have ever seen a full-grown alpha silverback gorilla, you understand why he effortlessly commands respect.

With the arms approximately the size of a human man's thigh and many times stronger than a human, you can only imagine the strength of a silverback gorilla.

Even though the gorilla has dazzling strength, he rarely uses it. He knows how strong he is, and he is able to project that knowing to any would-be adversaries.

The gorilla can be perceived as quite intimidating because he will let you know what he is capable of with just a glance.

Gorillas like to live a relatively peaceful existence in solitude in the mountains as a group, the family and extended family of this group is called a band.

Living high in the mountain jungles of Africa, the gorilla has few natural predators, (other than poachers) although leopards have been known to attack a gorilla.

However, there will always be rouge challengers, such as a wandering single male who wishes to take over his family, and when this inevitably happens the alpha male will defend his position with deadly brute force.

A fight between two male gorillas is very violent, and taps into the significance of the statement  "the might of the warrior".   The gorilla takes no prisoners, he is a symbol of strength and does not suffer fools.

This "mightiness" of gorilla symbolism rises from an instinctive need to fight for what is rightfully his, what he has earned.  The alpha gorilla steps into the role of warrior, and in a gesture to show his power he mightily beats his chest as a show of intimidation he proclaims he has no fear and he is ready to take on his opponent and unleash his fury.

It is a part of nature that an underlying contender will try to take the patriarchs position but, the patriarch of the gorilla family, the alpha male, will defend and protect what is rightfully his from all intruders.

Gorilla symbolism teaches us that in when we are pushed by others, that it behooves us to embrace some "righteous indignation", to be unafraid to stand for what is right and just.

Symbolic Powers Of The Gorilla

Medicine Powers of the Gorilla:
Humility, Gentle Spirit and Heart 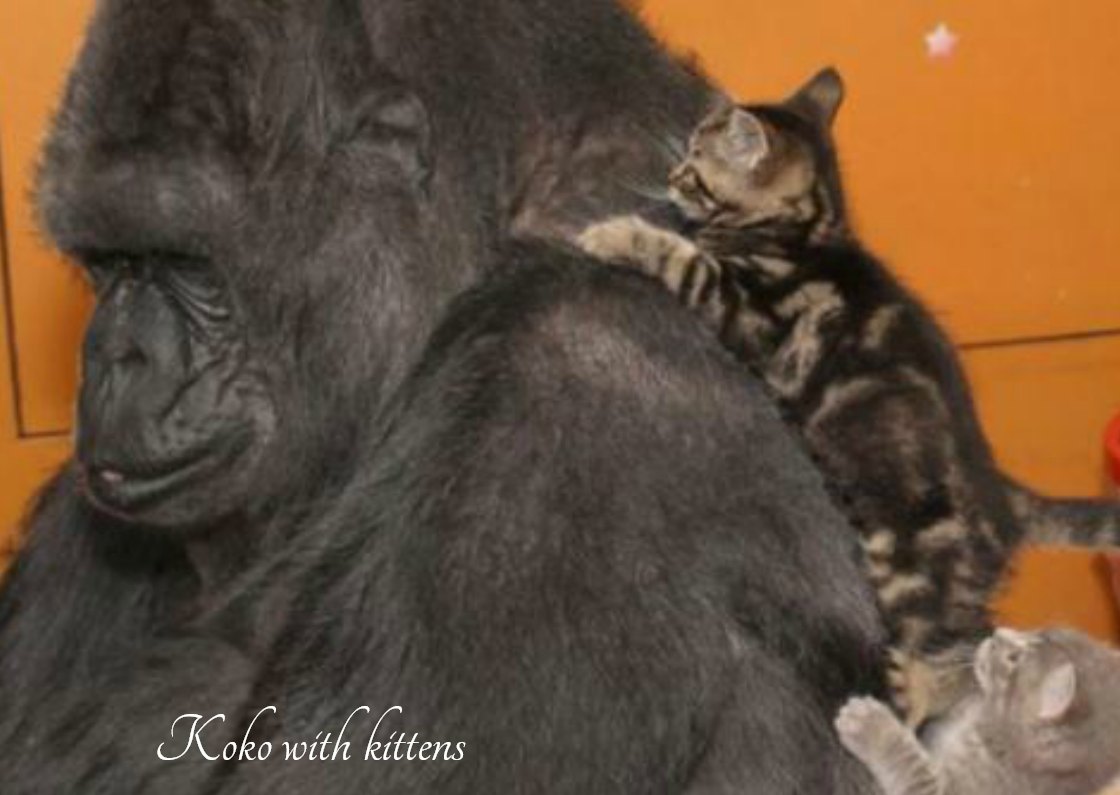 This photo of Koko the gorilla, who asked for a kitten for her birthday, exemplifies the gentle nature and loving heart that a gorilla can have.  Koko cuddles and plays with her kittens endlessly, and Koko names her kittens all by herself.

Totem Powers of Gorilla Symbolism
~ The Power Of Humility

The totem powers of the gorilla teach us by example that humility comes before ascension.

There is great inner strength and fortitude for those who have a humble heart, this is very empowering, it exudes an aura of strength.

Gorilla's strength begins with a heart that is gentle and humble.

The gorilla totem animal knows that "false pride" is not a natural state of being, indeed it is said that "pride comes before the fall".  False pride is arrogance, and has never been earned, but the gorilla is a symbolic example that true strength comes with humility.

There is a "true pride" that comes from knowing your place in the universe, this could be called your souls essence, and the gorilla has attained this level of knowing through grace and humility.

Gorilla shows us that when you "know" humility you are filled with a sense of true pride.  This knowledge begins to reveal the answer to the question: "what is my purpose"?  Because it is only at this point that you are ready to hear the answer.

With gorilla as a totem animal, he helps us to learn that the only way to find your true purpose begins with a humble heart.

The gorilla knows very well how to find the path of the Spirit.   Gorilla spends much of his time in quiet and has learned the art of "walking meditation".

Gorilla symbolically teaches us that walking meditation purifies the heart and helps to remove blocks that would keep you from receiving Spirits blessings, and from hearing Spirits voice.

Gorilla understands and embraces the importance of a quiet gentle nature.  The spiritual meaning of Gorilla is to learn to find time for "walking meditation", which is a state of zen and is a catalyst to creating a pure heart and gentle spirit within oneself.

Gorilla draws a divine power from meditation, and this power is transformed to physical strength, from which he can draw from at any time, and he uses this power to protect himself, his family and his legacy.

The pure heart of the gorilla is the conduit for the relationship with soul and Spirit, and this relationship bestows him with a strength so impressive and extraordinary that it's supernatural.

The gorilla spirit animal is a symbol of authority.  Gorilla has been granted "authority" because he has proven that he is responsible for it.

This kind of authority is not something you can declare by proclamation because you want it, it is granted by the universe, that is the only way it is earned, and it is earned and never simply given.

As big and strong as he is the gorilla spirit animal is known world wide as "the gentle giant".

When you watch the gorilla, you can see he is closely observing all that is happening around him, quietly... discerning.

The gorilla could effectively be hell on wheels, causing chaos and destruction wherever he goes, but he knows his strength and uses it wisely, and this is what has given him the ultimate authority.

Make no doubt however, that if provoked the gorilla is prepared to unleash his fury at a moments notice if needed.

Dian Fossey Lived Among the Gorillas

In 1963 a daring and brave woman by the name of Diane Fossey undertook an unfathomable mission, to go to the rain forests of Africa, to live among, observe and study the elusive gentle giant; the gorilla.

"By 1980, Fossey, who had obtained her PhD at Cambridge University in the UK, was recognized as the world's leading authority on the physiology and behavior of mountain gorillas, defining gorillas as being "dignified, highly social, gentle giants, with individual personalities, and strong family relationships." [source: wikipedia]

If the gorilla has come to you in your dreams, know that you are being called to listen to your heart and find your unique strength. That special hidden strength that all beings have within them is their truest  power and once acknowledged helps to unfold the path of destiny.

Once you find the core of your strength, your purpose unfolds before you and all other weaknesses in your life draw and are fed by your core strength and also become strong.

In finding the strength of the gorilla within yourself, others around you will recognize that power and authority and it will be a mighty shield against any intruders who seek to take your power from you.

When you dream of the gorilla, she or he is calling you to find your core strength and stand against any intrusion that would take your peace, and your power from you.

Gorilla symbolism in dreams is calling you to use your hidden strength to protect yourself, and those who are in your care.

Dreaming of a gorilla can also signify that your soul is calling you to find time for quiet contemplation, and to learn the art of walking meditation.

Gorilla is a beautiful symbol for the balance of strength and quiet mindfulness, and gorilla is here to help you as you take this step in your spiritual evolution.