Kangaroo Symbolism. . .  Spirit Animal Kangaroo brings the message "hold what's dear to you near your heart".

Kangaroo is a beautiful symbol of wide open uncharted territories.  Kanga and Roo the beloved friends of Winnie the Pooh, are sweet and adorable symbols of the loving bond of mother and child, and a Kangaroo figurine or print can be a perfect gift for an expectant mother.

Kangaroo symbolism is defined in the leap of the kangaroo. The kangaroos leap represents the quantum leap that one can take in their life. The leap can be in personal or professional areas. The kangaroo has many other qualities that coexist with the quantum leap, such as balance, direction, strength, hearing, speed, and competition. But of all its traits, the thing it loves the most is to jump high and far. Jumping for the kangaroo is more than just a physical thing. When the kangaroo jumps it puts all of its intention into it. When it is jumping it activates its intentions through its body with every leap. It is a form of meditation for the kangaroo, and the way that it manifests its thoughts. 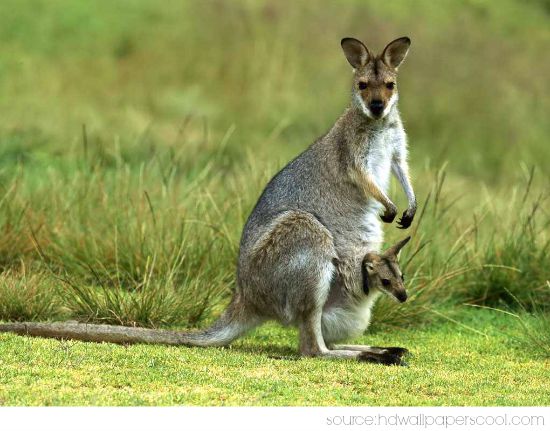 The Kangaroo Spirit Animals ~&~
Links Between The Physical And Spiritual Realm

As the kangaroo jumps it aspires to great things. It leaps as if to reach for its goals. It also leaps with joy at the mere pleasure of being alive. That is the way that it gives thanks to the creator for life itself, that is, to jump with joy, this is the bridge between the physical and spiritual realms.

As with all creatures and humans as well, we all have a way that we express our true nature. For the kangaroo it is to leap for joy, but it also gets joy in expressing its desires to the universe through its leaping. For the kangaroo, jumping is its form of prayer. All of its desires are in one jump, and it does this over and over as if to say, this is what I want, this is what I want. With that physical motion, it reinforces it desires, and makes its needs known to the universe, envision this, breathe it in and tap into the magical aspects of Kangaroo totem medicine.

The interesting thing about the kangaroos tail is that it also uses it for direction. The position of the tail also determines the direction it will go in, like the rudder on a ship. Slight changes in position make a big difference. Do you have the ability to steer your ship with ease? Why not make small changes instead of large ones. We all have a tendency to want to make large, visible changes in our lives, but small changes over the course of time is a better option. It gives you more control, and a better outcome no matter what your goal may be.

Competition is one of the kangaroos greatest attributes. The males are well known to "box" with each other over the females. You may feel that you are not very competitive in what you do, and as such, you feel dis-empowered. The kangaroo ( at least the males ) are born competitive. Everyone has a competitive side to them, its just about finding your power and expressing it.  Kangaroo power animal teaches that it may take years to find that power, but once you have it, you should express it competitively. Your true power is your birthright, and using it competitively is simply the expression of your true worth.  See Bear Polar Bear, and Lion for spirit animal power.