Shark Symbolism ~&~ Meaning of the Shark

"Shark has long been symbolic of being a Terror of the Sea, the Shark is fierce in everything it does.

Shark does not compromise, nor does he second guess his decisions.

When Shark makes a decision he is all in, there is no turning back and Shark wastes no time in aggressively pursuing what it wants... mainly it's prey.

Watch out when Shark is in the water, Shark will not wait for you to retreat or escape".

Symbolic Meaning of the Shark 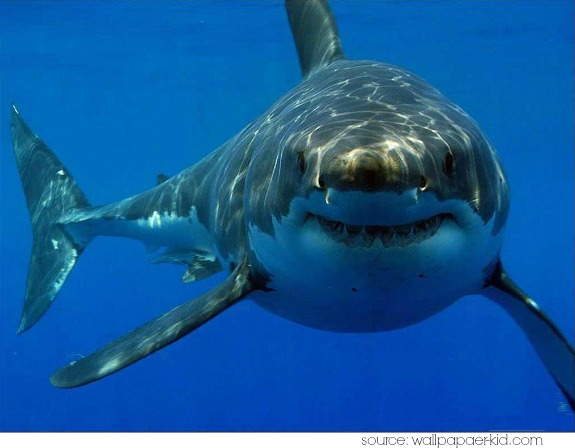 The Great White Shark has long been esteemed the terror of the sea.  To venture into the waters of the shark is putting yourself in an uncompromising position, as this massive and powerful fish is a beast that does not compromise...  he leaves you with a memory you will never forget if you happen to survive. So how does this aspect of Shark symbolism relate to your life?  That is what Shark spirit animal is here to teach.

Shark Symbolism and Learning to Protect Yourself

Shark symbolism teaches us the importance of learning to protect yourself, to survey a situation or relationship before getting too close, so that we avoid getting caught with a dangerous predator or spiritual vampire.

The Shark spirit animal is an authority figure of the highest reign, commanding respect world wide.

Shark is fierce, knows what he wants, and he wants it so badly he can taste in and smell it in the water.

Shark can be miles away from his prey yet he senses the movement and scent, and does not waste a moment before engaging pursuit.

In this aspect, you can meditate with the Shark totem energies and let it fill you with uncompromising and unwavering commitment and dedication to your pursuits.

Build up your drive and passion to the point that you can taste it, and then go all in, not looking back.

The Shark never ever looks back.

Shark energies are much like that of the Alligator.

If Shark spirit animal is appearing for you it is a clear sign that there is a clear and present danger in your midst.

If you have an ingenious idea or a new idea, you may want to keep it to yourself, as other Sharks in the water will immediately begin to swarm and take all that they can, without regard to anyone or anything in its way, regardless of it being right or wrong, it is merely the nature of the shark.

Just as in the waters, land Sharks are there to take what they want.

The Shark is a fierce competitor, if going up against a Shark in sports, or any endeavor expect the Shark to have stamina and moves you were not expecting.

If Shark is your power animal you are a foe to be reckoned with.  If your romantic partner is competitive with you, they have a bit of Shark in their nature, they want to always keep you on your toes.

If Shark is your Power Animal or Spirit Animal

If Shark is your power animal, you can align to it's dominant powers by tapping into it's spirit energies; be fierce, be bold, go after what you want with clear intention, go all in or do not go in at all.

Shark is not one that takes it slow and easy, it does not take small bites.

Shark charges ahead with all of the determination it has or can find.

Although the Shark is fiercely aggressive and deadly, it effortlessly moves through the waters with style and grace, and incredible presence.

The symbolism of a Sharks fin is danger, move out of the way and get to safety... now!

The spiritual meaning and power of the Shark would be to tap into it's fierce powers of determination and authority while not eating others alive, while not taking what belongs to others such as ideas, etc...  you can do this by balancing this powerful force of nature with a sense of grace and style.

Think of a strong fierce woman who is still graceful in spirit ~ Louise Hay comes to mind ;)

They know what they want, and go after it with ferocity and yet each beams with light radiating from within.

Who is your role model of being fierce yet maintaining grace, either man or woman?  Let her be your mentor so that you can learn to swim with the Sharks and yet succeed at your goals, all with style and grace of an enlightened one.

Shark carries the spirit of a fierce competitor