Bison Symbolism ~&~  Bison Spirit Animal Meaning  Bison is an indomitable spirit, the thundering of it's hooves claiming it's reign, it's aura radiates depths of inner power rising up in a show of power, it knows well the meaning of the will to survive, to face any challenge with the fortitude to overcome.  Bison holds the legendary power to overcome adversity and atrocity.
Bison speaks "I will survive".

Symbolism of the Bison . . .    Thundering across the plain the sound of Bison can be heard for miles, they run through the lands in the thousands.  Two hundred years ago they ran in herds of millions, searching for new valleys of tender grass.  The Bison has an indomitable spirit, the thundering of it's hooves claiming it's power and reign.  To the Native Americans sharing the lands with the Bison, the Bison were quite sacred and respected.

Bison or Buffalo ~ What's the Difference?

The grand animal that roams through North and South America which is commonly referred to as a Buffalo, is actually a Bison, not a Buffalo.  Bison and Buffalo are related in appearance somewhat but are a different animal all together, although they come from the same species or family.   The Bison has a big furry beard and coat to keep him warm, he lives in extremely cold regions, and he is not as large as the African Buffalo.  The Bison is not domesticated and has no desire to entertain that style of life.  The Bison wants to roam free on it's own terms... wild and free.

Symbols of the Great and Mighty Bison 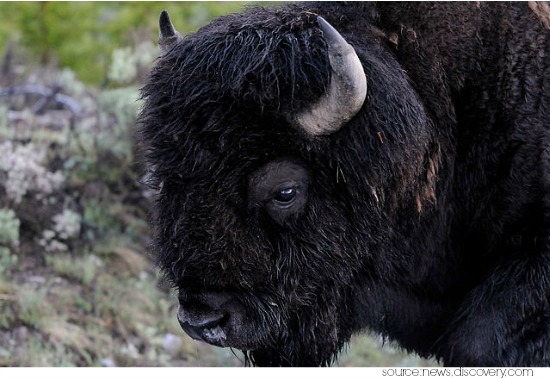 Bison symbolism and the need for change,
adaptability and endurance

The eyes of the Bison speak of the will to survive, the will to face any challenge and the fortitude to overcome.

Commanding respect by it's mere presence, the Bison is a force to be honored and met with great respect.  The Bison spirit animal is a wise teacher of living in balance with the Great Mother.  As the Bison stampedes across the lands she is grounding herself to the rhythms of the the ancient mysteries and cycles of life.  Bison has experienced great change and reminds us that change is a constant, everything is always in motion and great cycles have peaks and valleys.

Bison is the ruler of the plains, symbolizing abundance, freedom and might.  Bison symbolism signifies the need to endure the changes and forces of nature, to stand strong and mighty in who you are.

The symbolic power of the Bison is to align to the spirit of inner strength, for there is a place within all of us that provides the power to endure and overcome far more than we realize.  This is the strength of our spirit. the place that connects us to the Great Mother and Great Spirit.

Through the miles and miles of grassy plains, the Bison leads us on a journey of discovery, strength and endurance.  Bison spirit animal teaches you that when you want something you must be all in,  in what you choose to achieve and your vision and goals.   You must be attuned to you vision and hold in your body, mind and spirit the power to move forward, adapting to the changes that will come your way.

As you call upon the Bison for guidance you begin to hear the thunderous noise and the shaking of the land from the Bison as run wild and free across the lands.  You sense a great force of power manifesting from deep within, the roar of the hooves speak the message; you are aligned with the forces of nature, you hear the power of spirit speaking all around you, you are coming into your power in a way that will change you forever.  Bison has anointed you and you are now in the clan of the mighty Bison, ah-ho.

Bison bellows across the plain . . .
I am a survivor