Symbolic Meaning of Chipmunk
something good is on the way!

"Chipmunk spirit animal is a symbol that something good is on it's ways to you, something wonderful that delights your heart something that makes you smile and laugh".

The Spirit of Chipmunk is very benevolent, granting wishes of the most treasured of heart's desires.

Chipmunk is a totem of friendship... preparation and abundance... 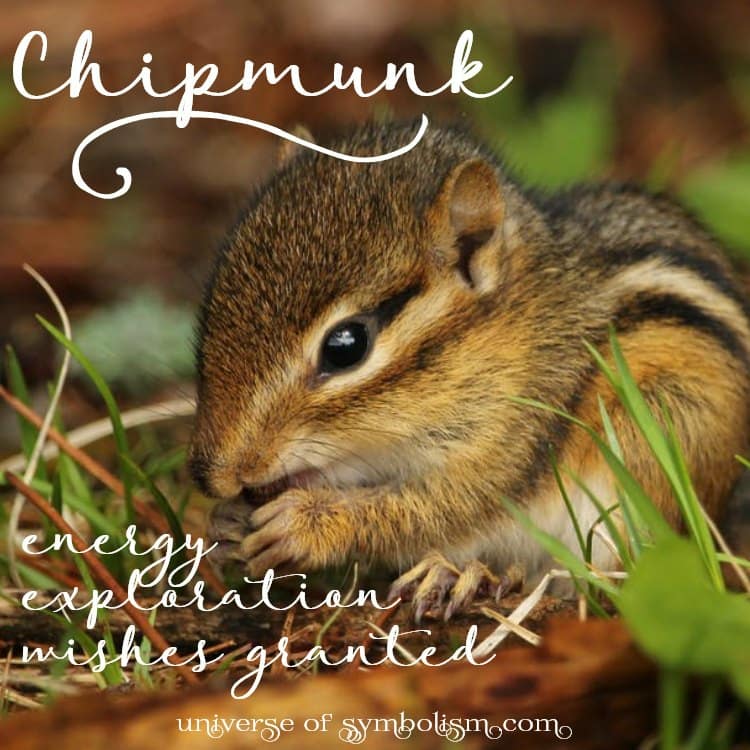 Chipmunk totem energy is also a sign that you will have an important conversation with someone close to you very soon, pay attention to the details!

Chipmunk always pops up out of nowhere, and just as quickly it vanishes into another world, the world of the Chipmunk... it has hidden pathways and secret tunnels hidden in plain sight all around you, this is symbolic of secret getaways or the magic of illusion.

Chipmunk power animal loves the enjoyment of a good adventure and exploration, he is always exploring and noticing any new changes in his environment... a new fallen leaf, a new pebble, or a new visitor.

Chipmunk will chatter to whomever is nearby telling them everything about the new discovery.

Chipmunk totem brings the gifts of:
artistic endeavors and creativity

Chipmunk speaks~ ask for a wish

Magic is most definitely afoot when

Chipmunk symbols appears for you!

Chipmunk totem animal is the ambassador of play, whenever you spy a chipmunk it's always frolicking and scampering about  and you watch it with the eyes of a child hoping to see what it's up to.

Chipmunk spirit guide always keeps you guessing... this gives the Chipmunk totem a bit of a mysterious nature.

Whenever you see a Chipmunk totem you can be sure that magic is afoot, synchronicities are in the air... keep your eyes open you may glimpse a faerie... Fairies most assuredly are in the midst.

Chipmunks and fairies appear encouraging you to believe in magic just like you did as a child.

Symbolic meaning of Chipmunk teaches the blessing that there are always spirit guides around you, ready to help... but you must invite the assistance of the spirits, and the instant you do you will feel the essence and energy of their presence and can begin communicating your requests.

Again, this is the perfect time for you to ask your guides for signs from the Universe and the stars!

Chipmunk spirit animal explores everything with it's hands,  (this trait is very similar to the raccoon).

Call upon Chipmunk when you want to try out and feel confident in your artistic expressions and experiments... particularly with your hands, let your hands be the channel of your intuition.

Spiritual meaning of the Chipmunk

The Chipmunk is quite the charming metaphysical symbol, filling the heart with joy and squeals of delight from children from 2 to 102.

Chipmunk is so ding~dang adorable, you can't help but be taken by his charms, and dazzled by his escape artist abilities

Just for fun, try asking for a wish big time by experimenting with some cosmic ordering ~ with the presence of anything that represents the chipmunk -  oracle cards, photos, figurines ~ anything chipmunk!

Like the Squirrel, Chipmunk symbol stores up his supplies for winter, and is always prepared...  seeing him is a sign for you to do the same...

Symbolic meaning of Chipmunk reminds you to make sure you have ample supplies of everything you need in case of an emergency.

The evolving symbols of the Chipmunk

Some of the Native American legends of the Chipmunk are not so favorable, as he was seen to be a symbol of chattering way too much!    However, I see the spirit energy of the Chipmunk as a most auspicious symbol.

Intuition tells me that the Chipmunks chatter may have tipped off the animals that the hunters were coming, lending to the unkind assessment of the Chipmunk.  The symbolism of the Chipmunk has evolved and we can now see the beneficial attributes of the energy of the Chipmunk in his lighthearted and playful, carefree aura.  Who doesn't delight in seeing a Chipmunk scampering in the yard or woods?

Star Guidance ~ & ~ The Special Magic
of the Chipmunk Spirit Animal

The special magic for Chipmunk as a spirit guide is "star guidance"... when you have a question you need help with, look to the stars in the night sky... ask for a sign, close your eyes and know the sign will appear at just the right time, the answer will come and it will feel like divine intervention and synchronicity ~ the epitome of divine timing.

Practice this *star magic* and you will begin to become the master of trusting your vibes, regardless of what anyone else has to say about the matter.

Another power animal who can help with receiving signs is the beloved and adorable Panda.