Giant Panda Symbolic Meaning...    by Presley Love
The Giant Panda bear is one of the most loved and adored animals in the world... cute, and cuddly with it's big soft expressive eyes... we just want to wrap our arms around this beautiful and very rare creature."

Panda is a very slow moving animal, he roams carefree through the mountains his primary focus is finding and eating bamboo... all day long.  Alas, the Giant Panda symbolic meaning encourages us to slow down, to stop multi-tasking which can be a huge drain to our energies.

Panda totem needs to conserve as much energy as possible and by eliminating multi-tasking you conserve your energy, have heightened awareness and focus and find much greater pleasure in the things you are doing.  Panda bear brings out the oohs and aahs in all of us, and because of the sweet nature of Panda totem, it also brings out the caring and compassion we have in our hearts for something that looks to be so innocent and helpless...

Panda teaches the spiritual meaning of:  sacred ceremony and ritual 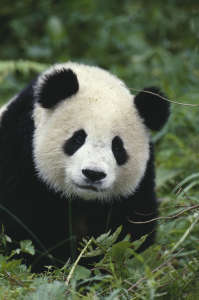 Spiritual Meaning of Panda ~ Symbol of Abundance. . .
To Be Surrounded by All That You Need, and More 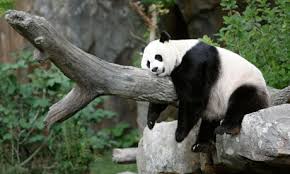 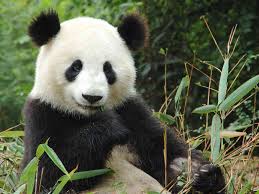 Lessons from the Giant Panda Bear shows us that rather than jumping into something impulsively, wait patiently... ask for a sign and then follow the hunches and intuitions. As Panda spends most of it's time chewing on Bamboo, great significant meaning can be gathered on the idea of  "chewing it over"...  If Panda symbol and spirit animal has appeared for you the lesson is to proceed slowly on your new endeavor,  idea or relationship... there is no need to rush.

Panda bear has an incredible presence about itself,  being so completely comfortable with itself in all that it does, it commands your attention effortlessly.  It appears to be in a world of it's own, lost in the pursuit of pure enjoyment.  Call upon the Pandas symbolic meaning as he is an excellent totem when you are learning to be comfortable with yourself, desiring to be totally and completely carefree about what others think.

Despite the Panda bears cute and cuddly appearance, the Pandas symbolic meaning in China gives the Panda the legendary reputation of being as fierce as a Tiger!  This offers great symbolic meaning and importance to understand that things are not usually as they appear on the surface... perhaps it is in your best interest to wait to give your trust to something or someone until they have proven their word and have earned trust.   Trust should be earned incrementally, with a watchful eye to see the true intentions and dispositions of another or the true state of a situation. Something or someone may seem completely harmless but you always need to wait and see what is below the surface.

Panda is the Emblem of Compassion...

The Panda is most charming, and beloved by people the world over.  Panda is rare and endangered and is the symbol for World Wildlife Fund because of it's gentle and compassionate symbolic nature.

Other Symbolic Influences of the Panda...

Because Panda has a diet of almost 99% bamboo, the symbolic meaning of bamboo has a great influence on the Giant Pandas symbolic meaning as well.  Bamboo is a symbolic representation of abundance and prosperity...and also of waiting and great patience.  Bamboo can take years to begin to grow, but once it takes off it is wildly abundant and grows and regenerates extremely quickly which brings the measure of great success and prosperity.

Because Giant Panda is slow and methodical, completely focused in all that it does, it is a fabulous totem to call upon to guide you in the study and use of sacred and ceremonial ritual.

Wrapping up Giant Panda Symbolic Meaning... Panda was once thought to be a part of the Raccoon family... they do have similar markings around the eyes and they use their hands in similar ways, etc...  See the Raccoon as well as other Bears ....