Spirit & Totem animal powers of the petite and oh so charming little Parakeet.

Not only is this little bird so delicately beautiful, she is a natural at the art of flirtation, just the coy little way she holds her head, looking up with at you with eyes of trust and love, the heart begins to swoon - that's all it takes and you're hooked, you want to take care of her and make sure she is protected and loved - you just can't help yourself.

This little bird teaches the secrets and powers of sweet disposition, inner strength & quiet observation,  bundled together this quite a fierce little package! 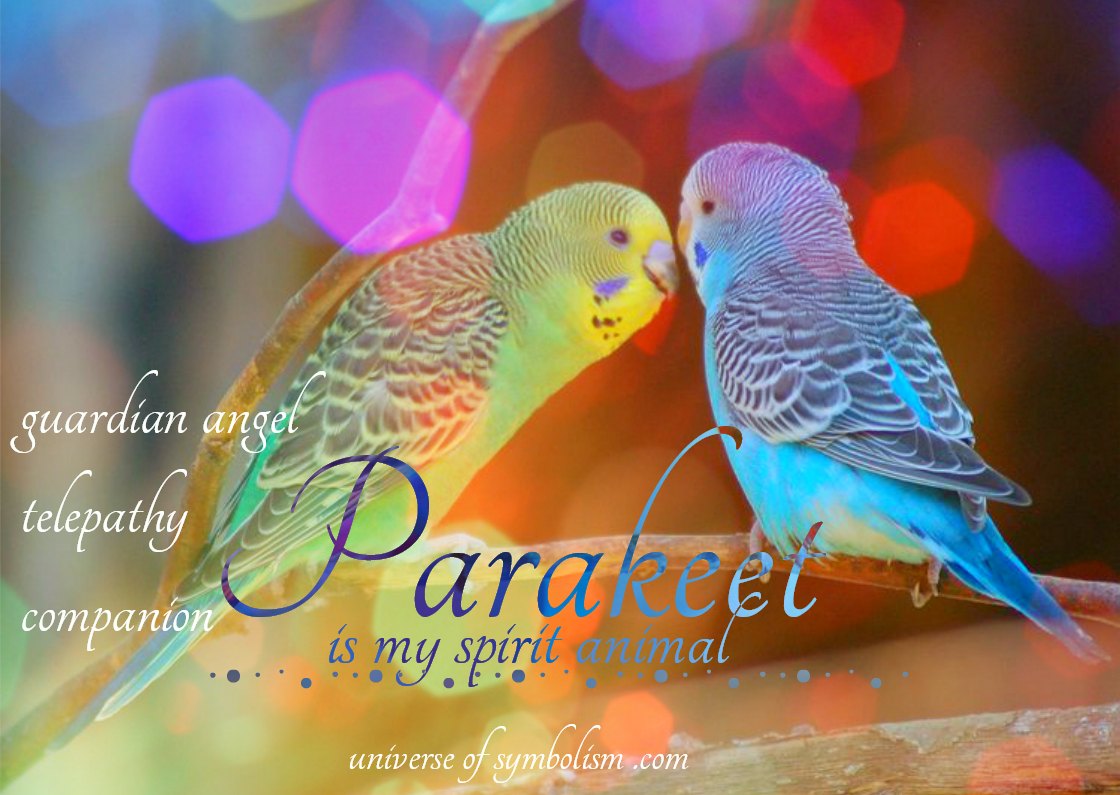 The parakeet is commonly called a "budgie", short for budgeriger

Parakeet has learned long ago how to thrive in the most challenging of environments, to make the most of what one is given, and to turn that into something special - filled with purpose.

She can be found living wild and free in the one of the harshest climates on Earth; the Outback of Australia.

However, some of her family prefer the wanderlust beauty and wilds of Buenos Aries, and the Amazon.

Wherever the Parakeet has been kept as a pet, enough of these adorable little pets have found their freedom to the outdoors either through an open door or window or by being set free.

Unfortunately, a pet parakeet does not have the skills to survive if he's set free, but remarkably, sometimes - somehow they find their own kind and have flocks and families.

It's rare but sometimes you can spot one or two in your neighborhood, or maybe you're lucky enough to have them nesting nearby ;)

Parakeet needs a lot of room to spread her wings and fly about, she truly loves to explore.

This most adorable little spirit animal is also very social and very affectionate, they love to nuzzle and give abundant kisses to those they love.

Along with Lovebirds and Swans, Parakeets symbolize love and romance - perfect for Valentines Day! 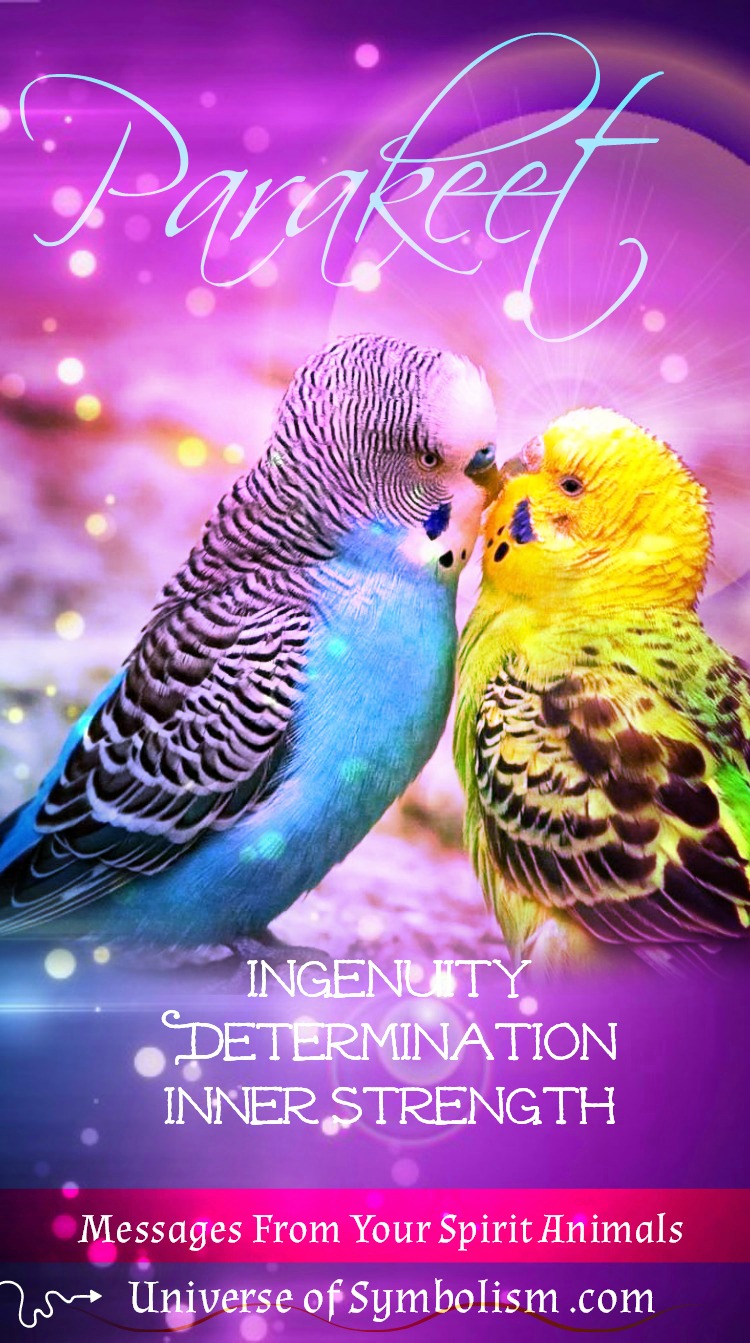 join us in supporting the Audobon Society

Spiritual Meaning of the Parakeet

Although the parakeet spirit animal is quite small, his powers of stealth are quite large and very significant.

He incorporates "stealth" in his process of observation in order to keenly discern the intentions of others, however subtle they may be - mainly predators.

He always positions himself in places that are inconspicuous in order to observe his surroundings without drawing attention to himself.

In this way, the intentions of predators and even those of his own kind can be perceived in their raw, unfiltered form, for this is the only way to truly know another.

Parakeet symbolism reveals to us the power to embrace stealth in quiet observation, to know how others truly are beyond the masks and filters of appearances.

Similar to the Owl, one of the parakeet's symbolic medicine powers is based on the ability of observation, but the power of her observation comes with stellar and unique gifts of "perception".

When observing an issue or object, there will always be varied perceptions.

The parakeet is exceptionally gifted in having no barriers in place to be able to perceive all aspects of a given subject.

The parakeet spirit animal has "no bias" to interfere with the truth concerning all that she perceives.

She has been given the gift to  be able to glean secrets and details that lie hidden below the surface of outward appearance.

Like the scales of a Libra, she is objective and fair in her judgments and assessments.

With this unbiased perception, she then takes action and responds to all situations at the spiritual and metaphysical levels.

The parakeet is like a fair little winged guardian angel of the animal kingdom and humans alike, this is why so many people love to have them close by and keep them as pets.

It is not just for the sake of observation that the parakeet spirit animal is observant.

With her power of observation comes the power to regulate the spiritual laws of the Earth.

Just like the Dolphin, one of the superpowers of the adorable Parakeet is that she is capable of telepathic communication!

If you have one in your home, she or he can protect you from danger as the parakeet can perceive danger with her keen intuition.

Her intuition is blended with her senses of physical observation.

Parakeet is primarily a guardian and keeper of spiritual laws and therefore has been given the ability to protect all others, and warn them of danger and advise courses of action via telepathy and intuition.

Parakeet Symbolism &  The Power Of One Mind

All parakeets share the powers and gifts of telepathy, yet they remain individuals.

Parakeet spirit animals evolved together. What one learned, all others have benefited from as well.

As a result of their telepathy and one-mindedness, the whole Earth receives the benefit of their beautiful and benevolent guidance, this is the gift of service they bring.

Yes, they even speak to us, as they are sweet little instruments of divine intervention.

Yet the parakeet can only guide and protect those who desire to serve others in the same way, this way they remain consistent in their mission and purpose.

You can tap into your parakeet's mind when you want to receive from nature and know the truth about your purpose here on Earth, and when you are ready to step into being of service for the greater good of all.

By communing with the mind of the parakeet you tap into an army of winged angels. 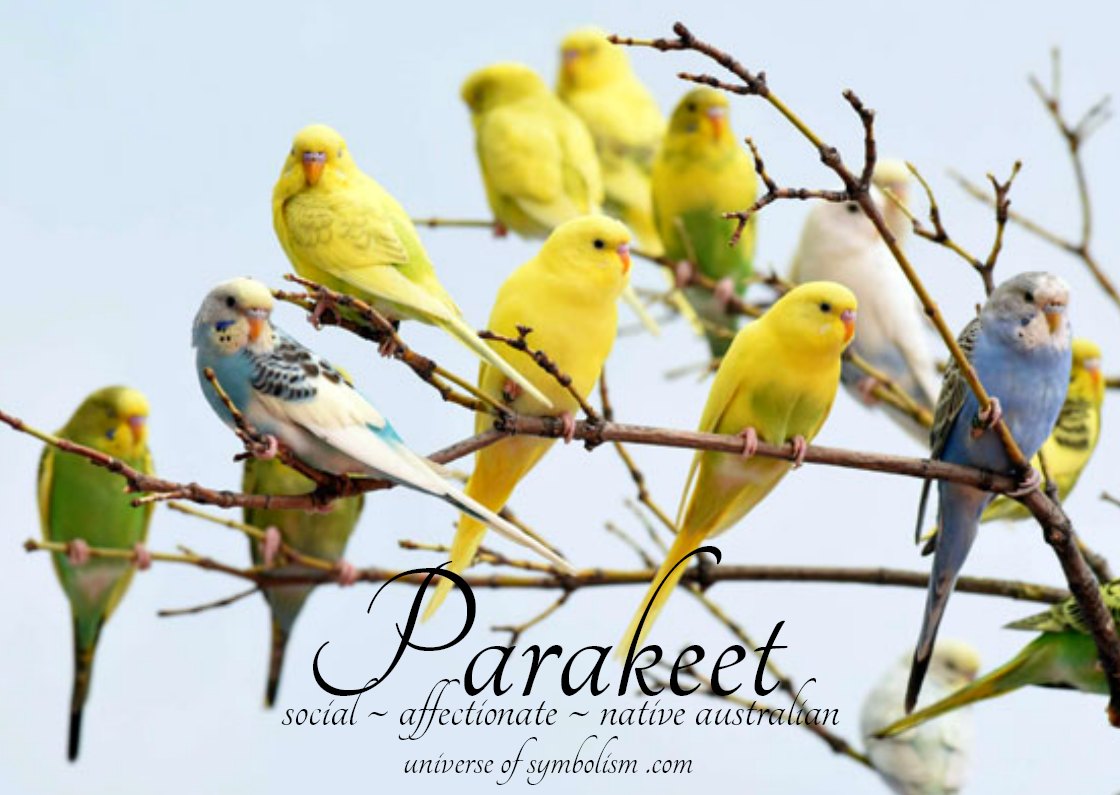 To dream of a parakeet is a sign that you may want more freedom or space in your life.

It may mean that your spirit wants to explore wide open and untamed wild spaces.

This is especially true if you live or work in small or confined spaces.

The parakeet confers with all angels, so she can come to you in a dream to bring you a message from one of your angels.

The parakeet is closely aligned to the 6th sense, may also come to you in a dream to nudge you into looking more closely or listening more closely to your innate powers of observation, perception and intuition.

Perhaps the parakeet has visited you in a dream because it's time for you to tap into your energies of becoming "earth angel".

These energies are within you, and the Universe may be calling upon you to share your divinely appointed gifts with the world - you just never know what can happen if you do!

Is a Parakeet a Parrot?

Yes, a Parakeet absolutely is a Parrot!

Parakeet is a term used to describe a type of small parrot. Australia alone is home to hundreds of species of parakeets, including the budgerigar. In America, the budgerigar is also commonly referred to as a “budgie,” an “English parakeet,” or simply as a “parakeet.” - quote from Chicago Zoological Society