The Ancient Mythology of The Greek Goddess Artemis

The symbolic meaning of this beautiful goddess is pure focus.

Her twin brother  Apollo, rules The Sun. She is the greatest among all The Greek Gods, male or female, when it comes to The Hunt.

She never misses her target"!

She is known to be the chaste huntress because of the purity of Her heart. She has nothing else in mind except her purpose in life.

She is not distracted by the lives of others, or what they say or do.

She is completely focused on her own objectives, which symbolically, is The Hunt.


The power of Her magic is to hunt down the desires of Her heart, and always obtain them.

She has a Golden Bow, arrows, and a quiver that never runs out of arrows, whose meanings signify her determination. Her arrows always hit their intended mark.

She has Sacred Maidens that attend to her every need, and hunting dogs that go out with Her to The Hunt.

The symbols of her power are her bow, and the moon.


Her sacred animals are the deer, the bear and the snake.

The Powers of Goddess Artemis...

Artemis brings the powers of:
cunning, shrewd observation, and focus

Artemis possesses the traits of:
stamina, perception, and fertility

Artemis brings the magic of:
accuracy, intuition, and psychic power

Artemis ~ Greek Goddess of the Hunt and the Moon . . .

Even though Goddess Artemis is blessed as "The Eternal Virgin" by Her father Zeus, She is wild as the wind, and tumultuous as the sea, never allowing anyone to tame her.


The spiritual meaning of her nature is "independence", and self-reliance.


As mentioned earlier Her symbol is also The Moon, her spirit tree is the cedar tree.

Artemis the Greek Goddess is an incessant Huntress and is the very essence and meaning of "pursuit".

She never gets tired, and she always has her eyes on a prize, no matter what direction she looks in.

Links to other popular
Gods & Goddesses;

The  power of Artemis' spiritual energy indicates that you must remain focused, determined, and persistent on your goal to achieve it! Artemis does not accept wishful thinking,

She is The Goddess of, and the very symbol of action.

She says "you must concentrate to the point that you can feel your objective accomplished before you have physically attained it."!

This is The Gift of Artemis' focus, this is called "faith"! Her purpose explains the very substance and meaning of faith.

Artemis  is so powerful a Huntress, that her faith and focus, have become one and the same!  This is her most important spiritual meaning, Faith In Focus . . . .Focus In Faith!

Faith is to KNOW you have achieved your goal before you see it in front of you, which for mortals, is nearly impossible, since they rely only on tangible senses. Your faith is The Magic and Power of Artemis The Huntress.

She faithfully focuses on her target from a distance, and with perfect skill, shoots her arrow, and hits her mark every time, because she believes, by faith, that she will hit her mark. . .

Her arrows symbolize Her powerful "intention" like flaming arrows straight to the target.

Artemis the Greek Goddess loves The Sacred Forests, and Holy Places of the Earth. She spends no time at home at Olympus, unless summoned by The Gods. The whole Earth is Her Sacred Hunting Grounds.

To this huntress  there is always another trophy to take.

To call on Artemis as your power, is a call to action. Go to the land of the Sacred Forest.... summon her spirit with the words of invocation.... She will show you exactly what needs to be done, and  she expects you to follow through once shown.

Artemis, huntress of the moon, make my aim true.Give me goals to seek and the constant determination to achieve them.
Grant me communion with nature, allow me to live surrounded by plants and animals that I can grow, protect and nurture.
Allow me the strength and wisdom to be my own mistress, not defined by the expectations of others.
And sustain my sexuality to be as yours -- wild and free as nature itself.  unknown 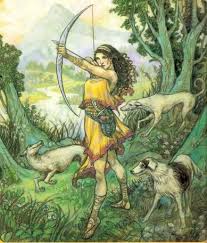