Symbolic Cougar Meaning ~
I am Cougar... Master of the Canyons

Symbolic Cougar Meaning...  by Presley Love
"Cougar in his essence is the epitome of a Spiritual Warrior through and through..... Capable of seeing threats, resources, and discovering safe sanctuary in the rocky canyons he is assured of creating abundance and continued prosperity for himself as master of his domain".

Fast and Furious is her nature...  the Cougar Totem Animal is Capable of sensing danger, and fending it off by signaling the intruder of the consequences of their trespass, hence she carries the symbol and energy of fury in all that she does, ready to be released without a moments hesitation.

Intuitively sensitive to its surrounding for miles around, this gives Cougar totem her powerful attributes of Awareness, as she is able to sense any activity, even out of her line of sight.

Her Awareness lends to her Extraordinary Sensory Evaluation as the Cougar can decipher all environmental factors in its territory on a sensory level, and plan a decisive course of action confidently, and definitively.

In Native American teachings the Cougar has the totem powers of being a leader, and is also known for precise decisiveness.  If Cougar is your totem you will be a natural leader,  you will be discerning and learn precisely when to make a move, or when to quietly observe waiting for the most opportune moment. 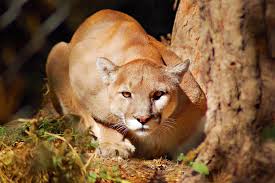 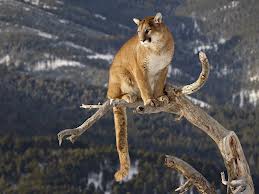 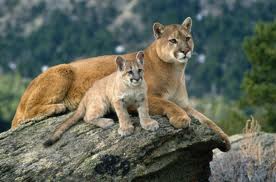 Cougar, Puma, Mountain Lion and Panther are names of these magnificent big cats ~ all the same species of cat yet having distinctly different names.

The Cougars trademark is the white coloring under his nose, and his very long tail.  Quite impressively, Cougars can jump 40' in distance and can leap up 20' in height.

As these big cats live in diverse regions, their totem powers range in diversity as well, that is why you will find different meanings for the different big cats based on where they live, and the vibrational essence of the name.

The Cougar has many names, the names of the Cougar vary by the region in which it lives.  In the southwest states of the US, and up into the Sierra Nevada range the Cougar is often called the Puma.

In Florida and some of the other southern states the Cougar is called the Florida Panther.

Cougars are solitaire and need at least 40 square miles of territory, if Cougar by this or any other name is your totem, you will need "breathing room", time for solitude and you will find living in a dense population quite uncomfortable.

Just like the Lynx known as the "ghost cat", you will never see the Cougar...  when the Cougar sees you she will make herself unseen, deciding if and when she wants to attack.

Cougar Symbol ... speaks the message:
I am  Cougar... Master of the Canyon...

The Cougar spirit animal represents the Fury of the female spirit,  and indeed she is the symbol of the dominant furious spirit of the Mother.   The female Cougar carries herself like a Goddess ... giving her the symbolic energies of the Mother Goddess.

As Mother, the female Cougar will fight violently to protect her cubs.  She will do whatever is necessary to provide for her cubs and insure that they are always safe.

With her ferocious screams that can be heard for miles... she is Master of the Canyon,  The Cougar totem is the embodiment of the statement, "Hell Hath No Fury...".   Her symbolism teaches you to protect what is dear to you, to walk with confidence in all that you do, to know where you are going and why.

The message of her Presence is simple, and clear, "Take Heed, Before You Approach Me".

return to top of Symbolic Cougar Meaning.  You might try these other big cats too.... Mountain Lion, Leopard , Lynx, African Lion or even the domestic cat, the Panda is also known as the Bear Cat...